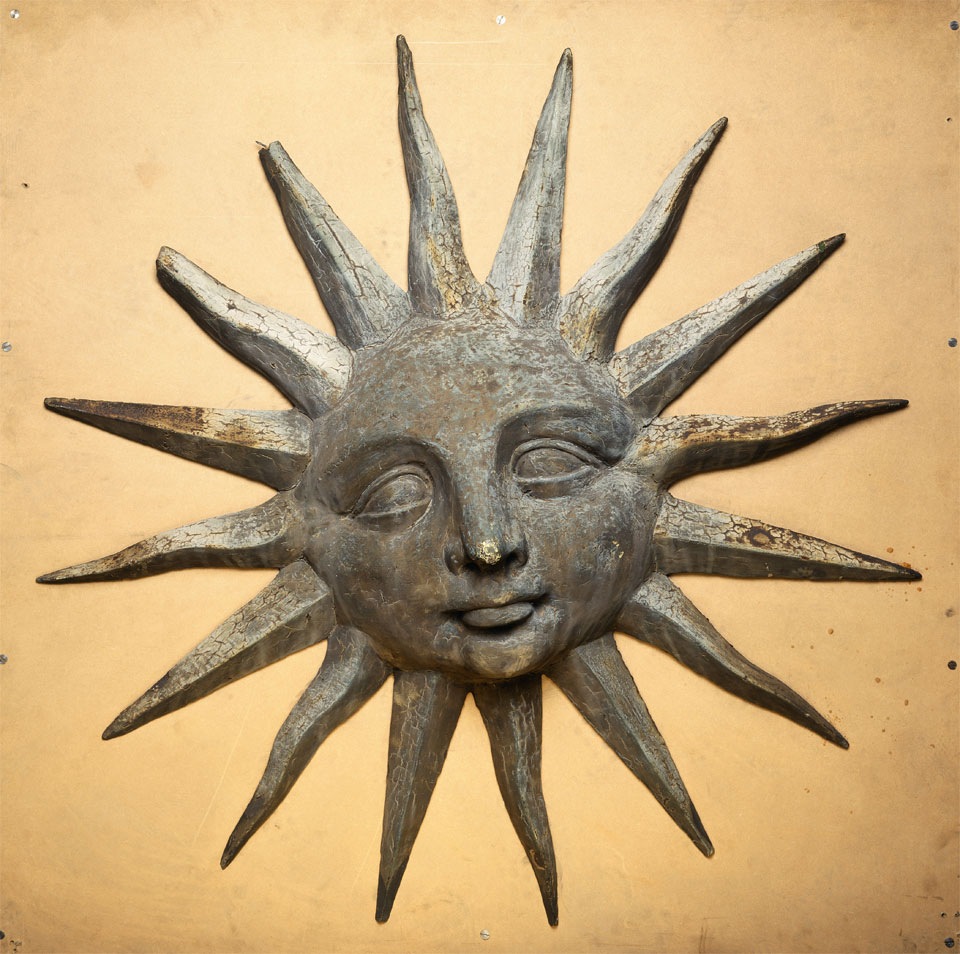 This wall of carved trade signs greets the visitor –  Giant locks for the locksmith, a leather shoe signposting the cobbler. A bear  for the barber (apparently bear grease was simply the best hair pomade). So far so normal.. 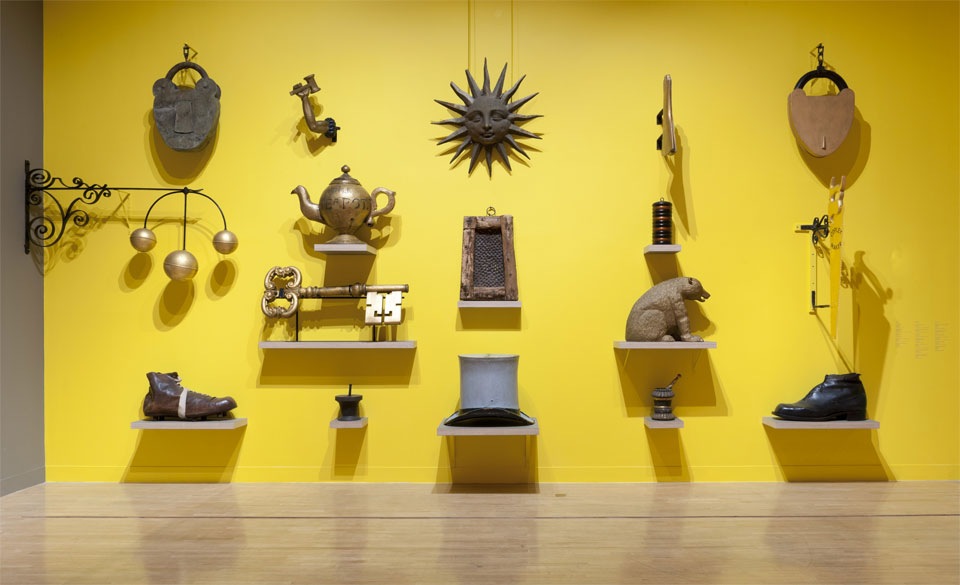 But things take a turn for the strange in the next room. A life-size corn dolly of King Alfred made by a master thatcher in 1961. It is rather reminiscent of the final scene of The Wicker Man.

There is a collection of artworks by the tailor George Smart of Frant, who used off-cuts of cloth and felt to portray the local worthies of Tunbridge Wells in the early half of the nineteenth century. Here is the so-called Goose woman, with her jolly red shawl and geese peeping out of her basket. 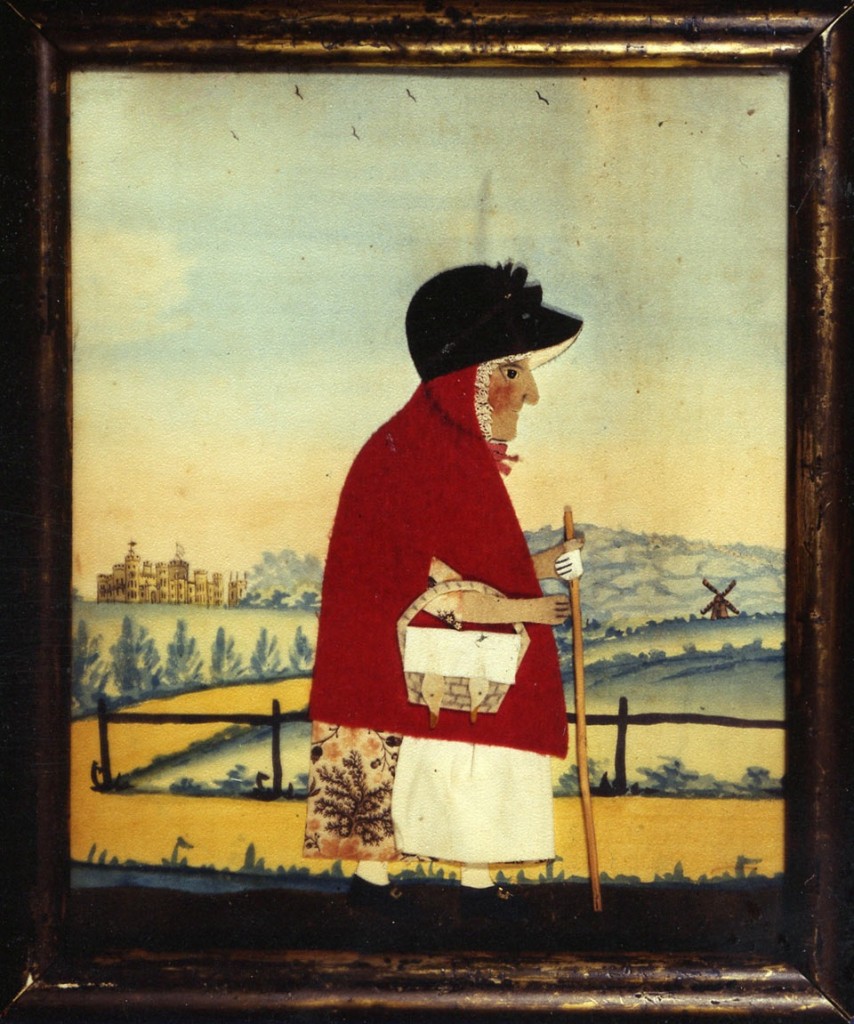 This cockerel was carved by French Prisoners-of-War during the Napoleonic Wars from odds and ends, including mutton bones. Yes, mutton bones! 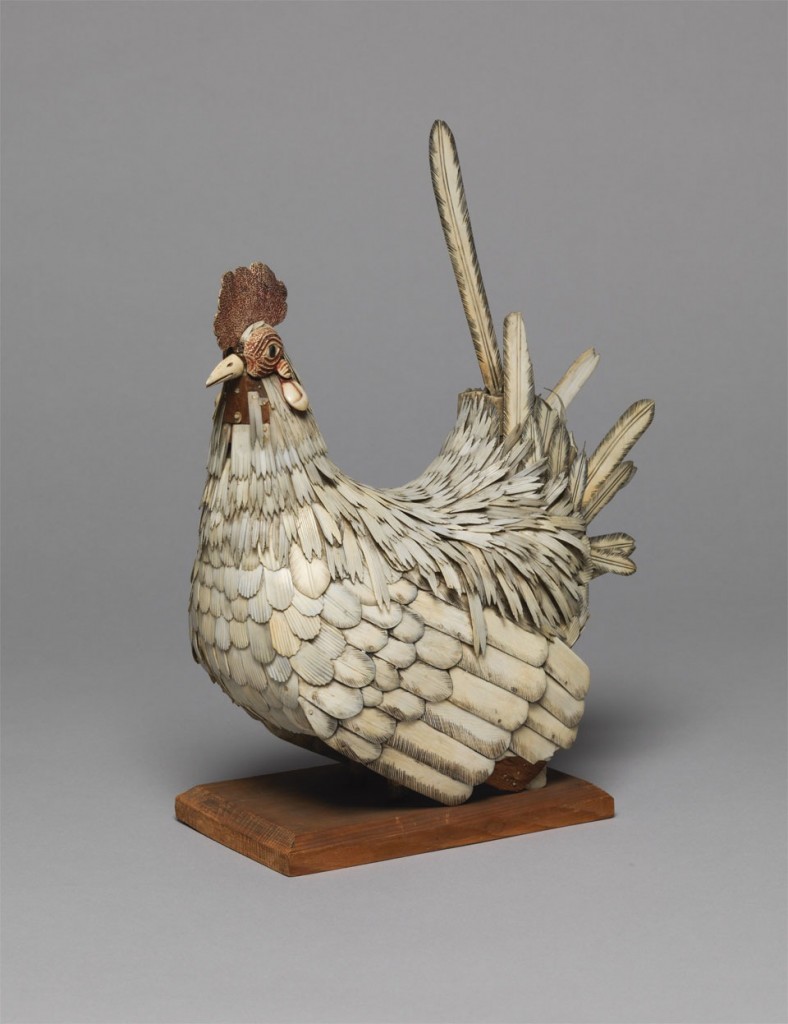 Amongst all the strange artefacts, these bottles are truly startling. They are known as God in a bottle. Like spiritual messages-in-bottles, the votives contain religiously significant items suspended in liquid. They were made by Irish men working on British building sites, railroads and down mines. 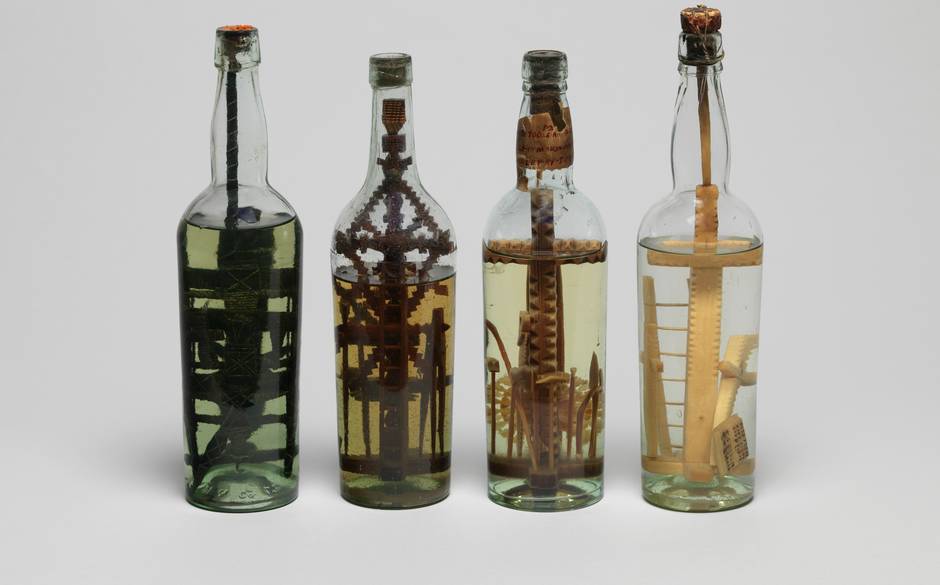 Another highlight of the show is the collection of figureheads from Britain’s sea-faring past. Once again highlighting  the superstitious dimension of much of  folk art, these beautifully carved and painted sculptures were intended to keep the vessels safe on their voyages. 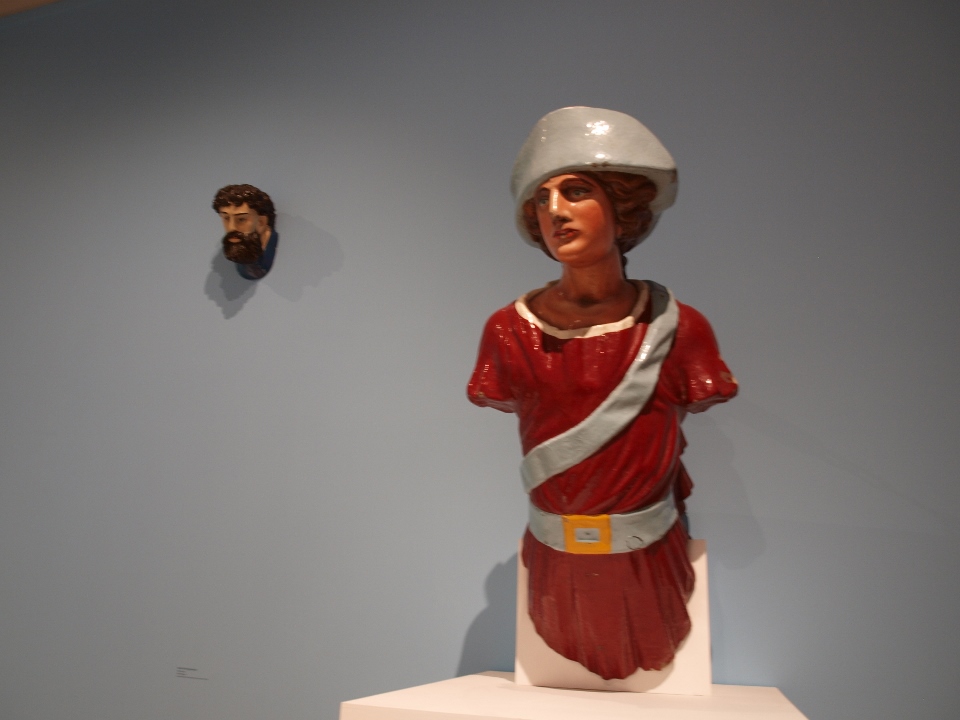 A fanciful lion and unicorn. 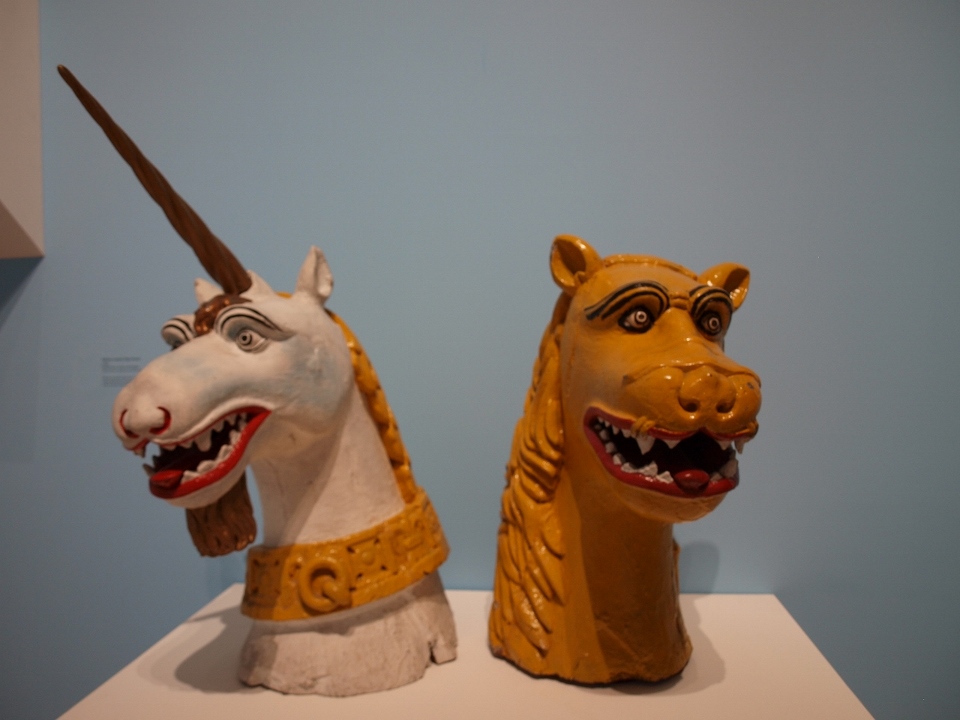 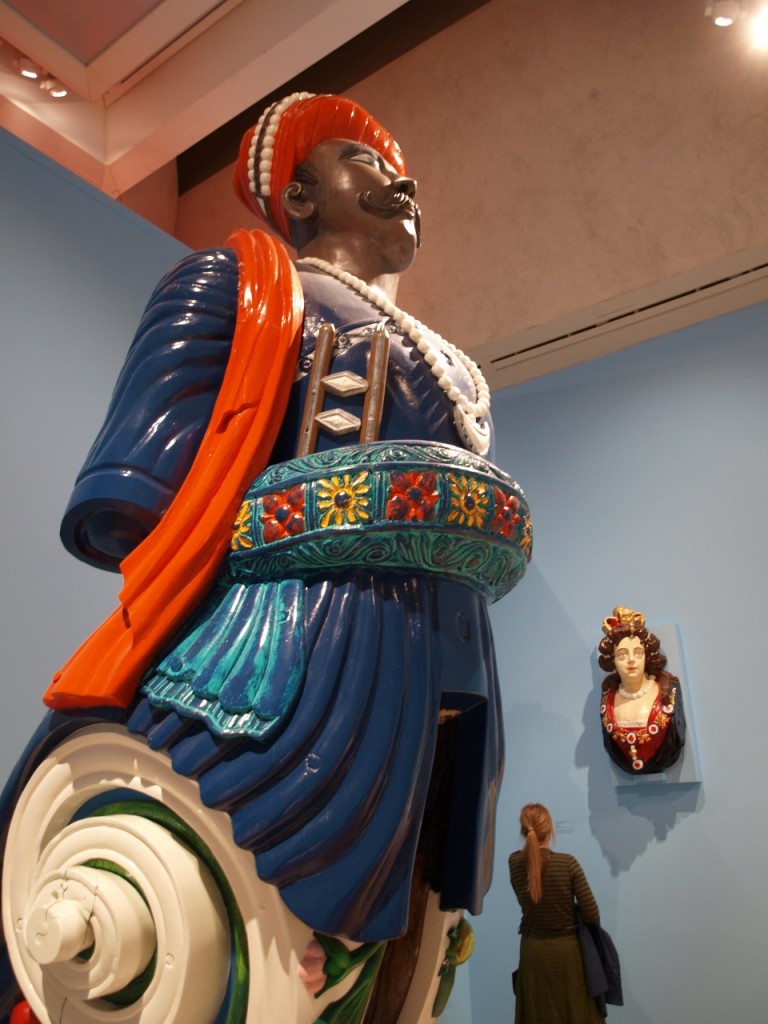 The most familiar artist featured in the show is Alfred Wallis, whose Cornish seascapes and boat scenes were taken up by Ben Nicholson and the St Ives circle of the post-war years. These works are charming and seem inherently modernist. In this company it brings into question the distinction between folk and fine art. 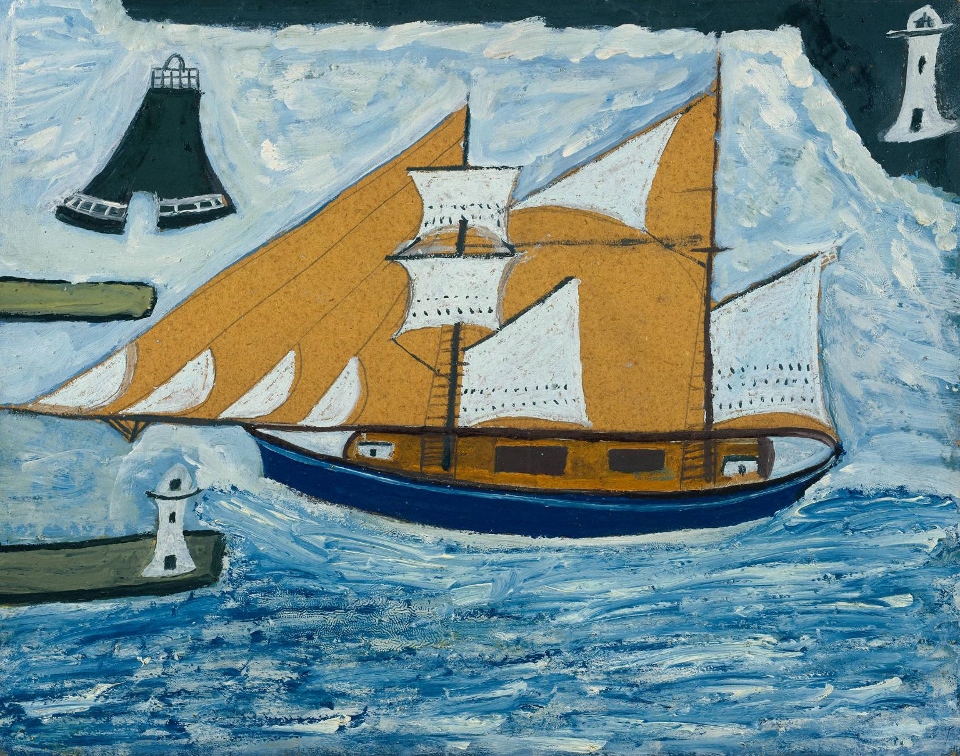 One of my favourite pieces in the exhibition is this extraordinary quilt by James Williams, a master tailor in Wrexham, who made this coverlet over a 10 year period in the mid-nineteenth century. The colours, the graphic nature of the design, the combination of depictions of the natural world with industrial achievements – all seem, well, modern, but it was completed in 1842. 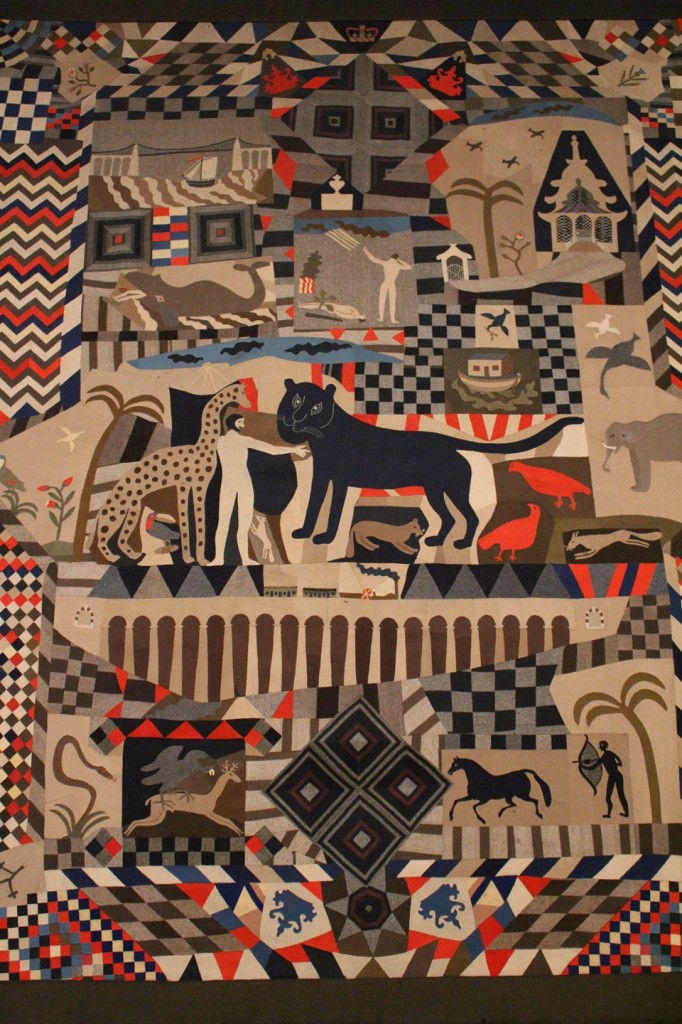 Mark Hearld, one of my favourite artists and somebody with an innate appreciation for folk traditions has used the quilt for inspiration to create a range of crockery commemorating the exhibition. Available from Tate Britain. 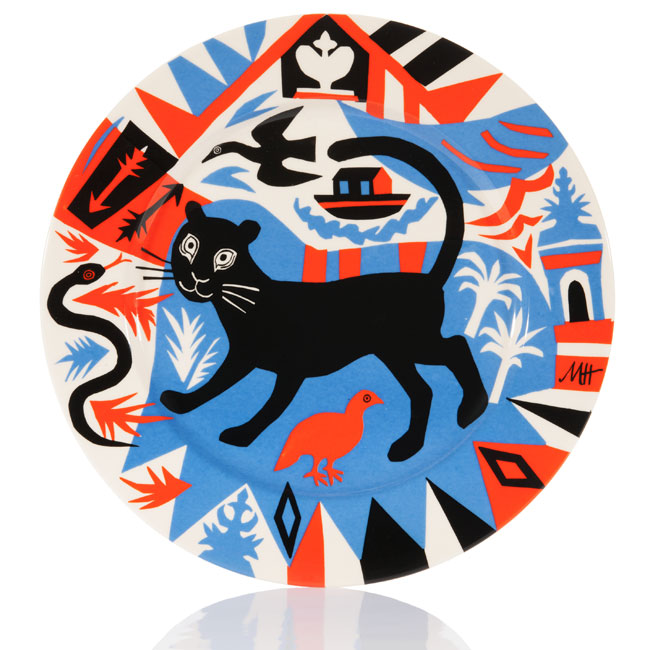 As well as championing arts and crafts from outside the usual critic-endorsed fine art milieu, this fine exhibition reminds one of the wealth of wonderful artefacts hidden away in local and regional museums all around the country. Wonderful and, well, strange it may well be, but I, for one, am looking forward to exploring this fascinating world.

British Folk Art will be at Compton Verney, Warwickshire from 27th September to 14th December 2014.

Previous post
Egon featured in today’s Remodelista
Next post
Read All About It! Egon’s House in 25 Beautiful Homes!