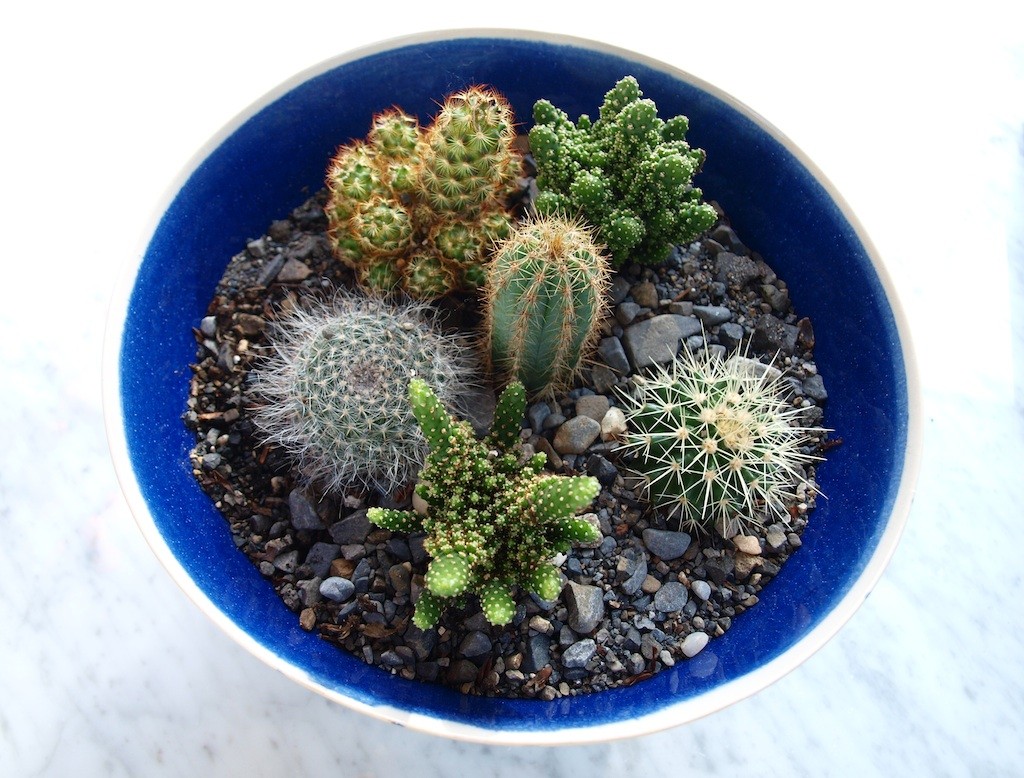 Plants play such a vital role in creating a harmonious and pleasant space. They are the interior designer’s secret weapon and essential to bring the natural world into your design. I was looking for some greenery to brighten up my cottage in Ireland. Given that we aren’t there much of the time, it needed to be a no maintenance solution. So I thought of cactus. In winter they completely hibernate and need little or no watering and even in the growing season don’t need anything like as much attention as other houseplants.

They have other advantages too: very slow growing, it’ll be a while before they need replanting. I also think they look great grouped together in a container. You could choose almost anything. Like most things interiors-related, it pays to try something a little unexpected. A wooden box or a zinc trough would be great, providing a nice contrast with the textures of the cacti. I’d have selected a quirky antique bowl if I’d had one to hand. Instead I went for this Marks & Spencer hand painted “Indigo” bowl. 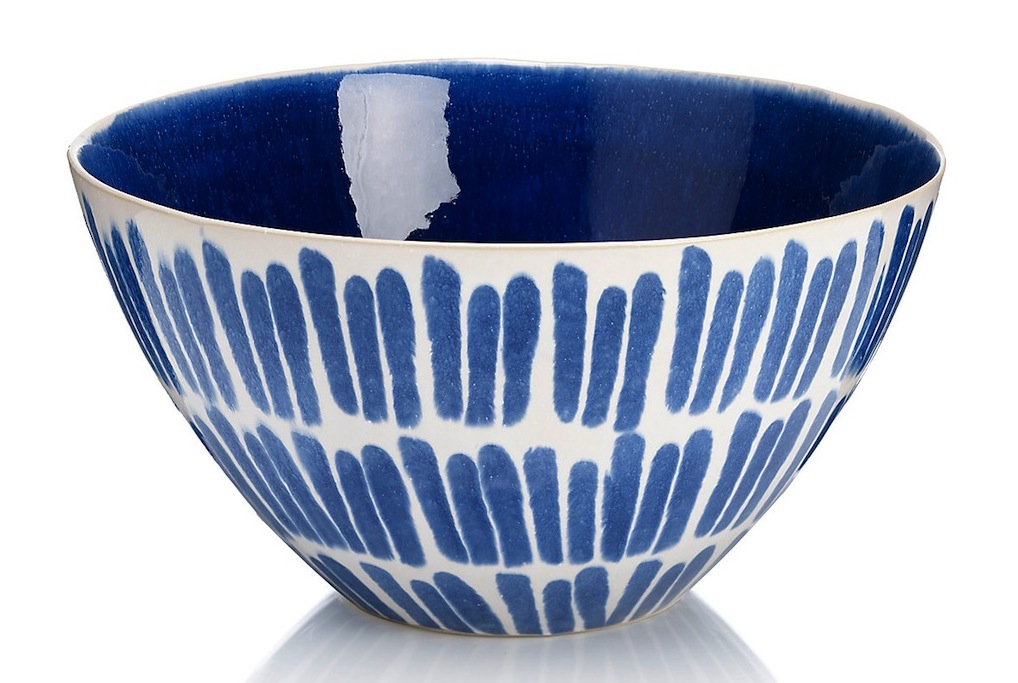 I like this bowl because of the great deep cobalt interior, which contrasts with the hand daubed stripes on the outside. If you are also using a container with an interesting inside, make sure you leave enough room at the top for it to be visible after you’ve finished planting. 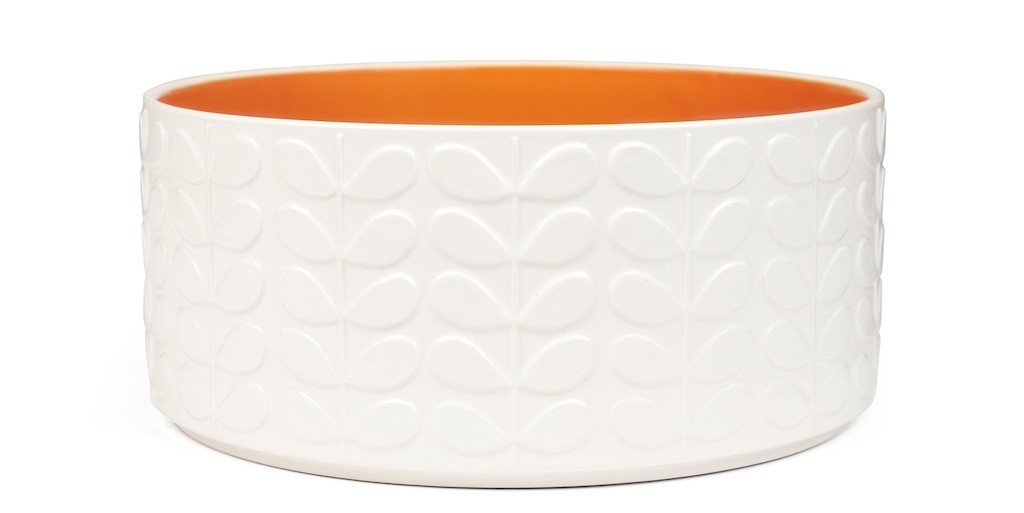 This Orla Kiely salad bowl would be another nice choice I think. I love the vivid orange interior.

Next, I went to IKEA for the cacti. €5 (or £4.50 in the UK) for three. Can’t argue with that. I got two packs, so six plants in total. Ordinarily I never plant in even numbers but in groups of three, five, seven etc.  The theory is that it looks more naturalistic. Anyway, I made an exception for this arrangement primarily as I didn’t want to have responsibility for the lone little leftover cactus! 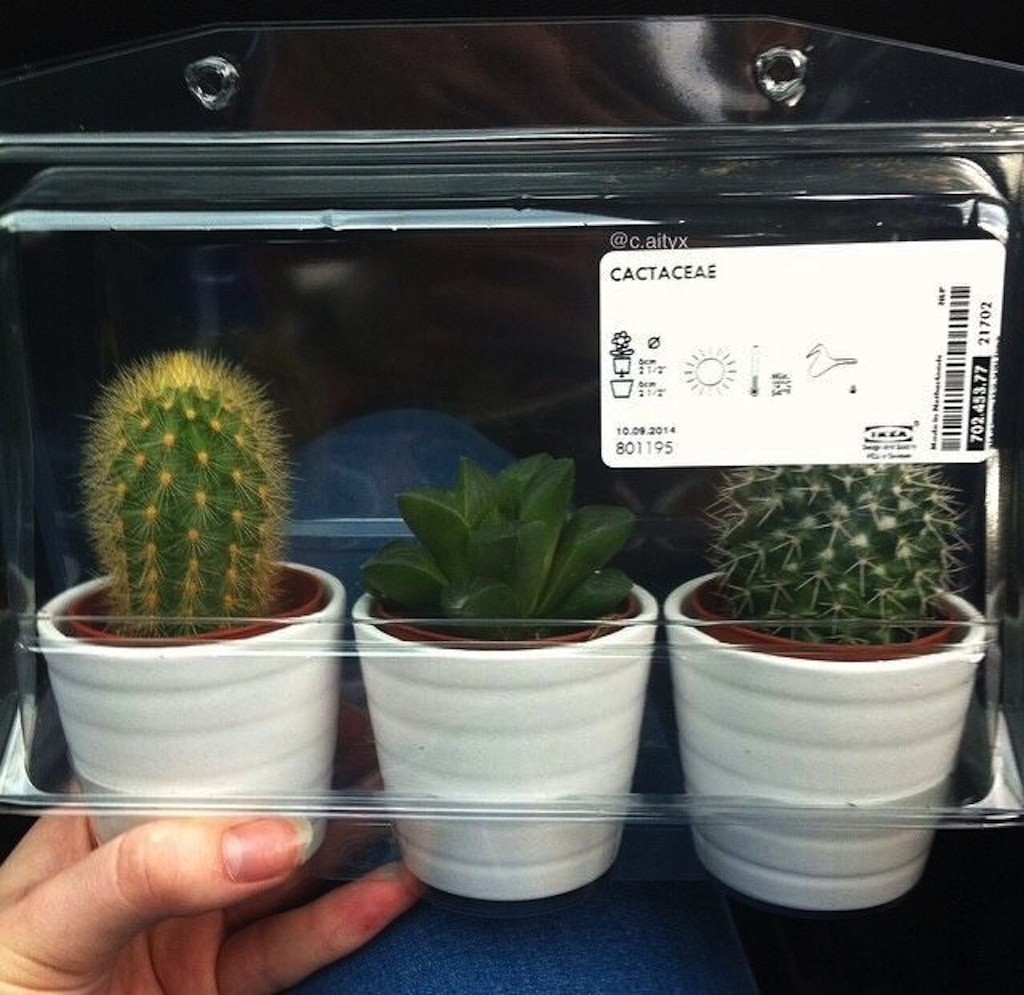 Wear very thick gloves for the next part – and be prepared to find the odd stray cactus spike on your skin for the next day or so. Gently tease out the cactus from its pot. I used a general purpose compost mixed with about 40% grit added to improve the drainage. They like a slightly acidic compost, with a ph of about 4 to 5.5. I also added a layer of grit at the bottom, about 2cm deep. This is especially important in a container like this without drainage holes. The cactus roots must not sit in water. Also don’t plant them too deeply – just to the same level as they were in their plant pots. I finished by adding some stones, pebbles and sand from nearby Lough Ree. Ok, it’s not very desert-like but I like that it’s locally sourced. 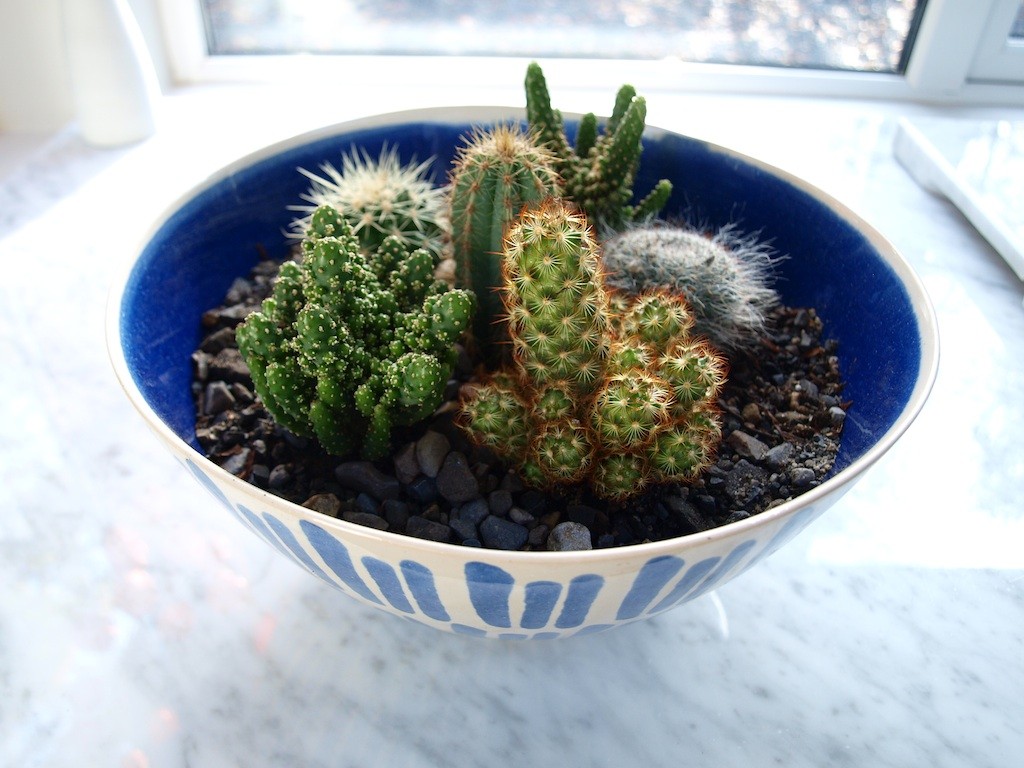 I selected a variety of shapes and types of cacti for texture and interest. It’s really up to you. I like that some are short and squat and others upright. 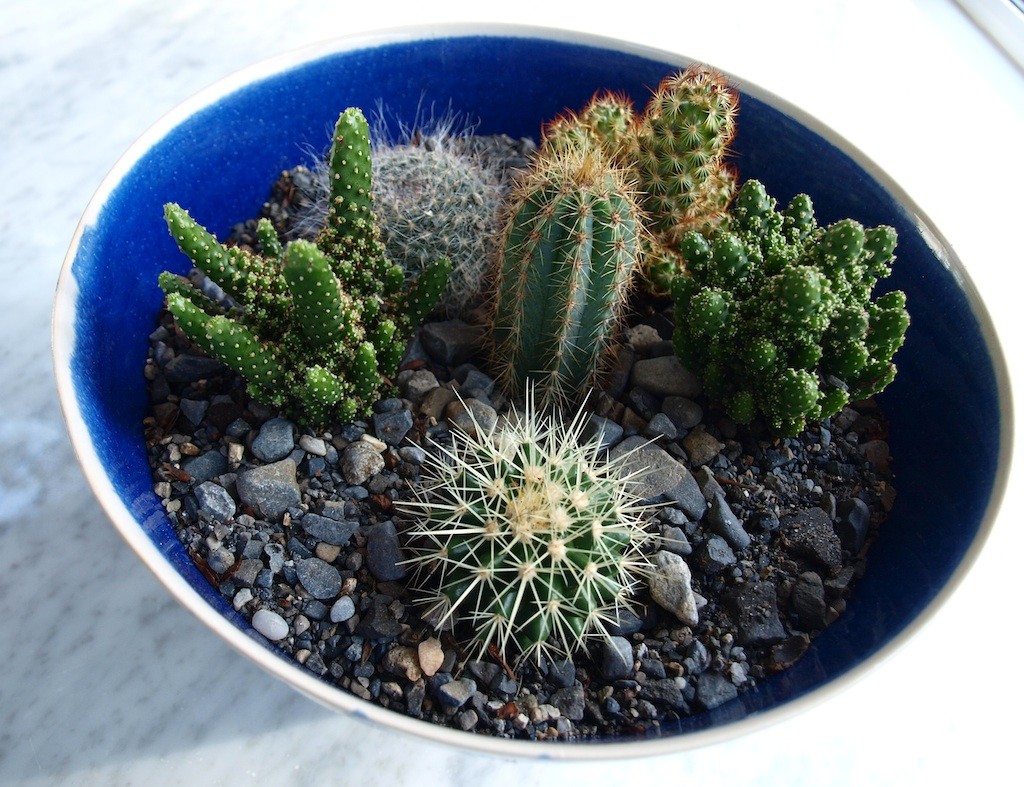 Remember, this type of cactus enjoys desert or savannah conditions – low moisture, dry air, bright sunshine, good drainage and high temperatures (in the growing season). I’ve placed mine on the marble counter next to two windows in the kitchen to maximise the sunlight it will get. 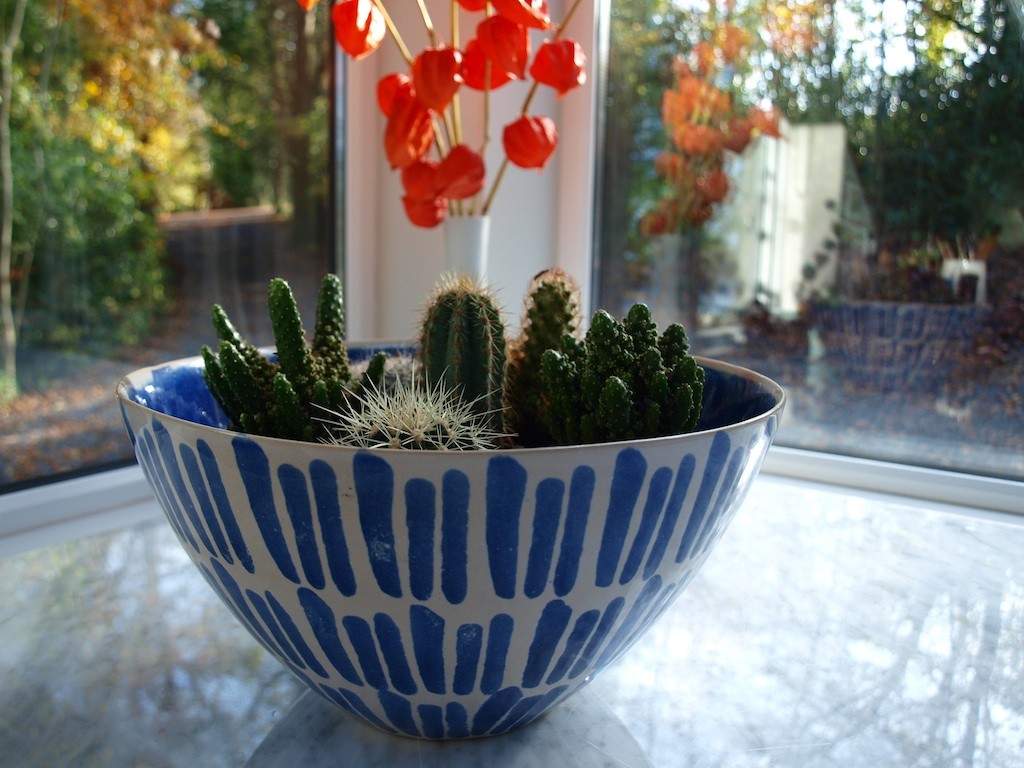 And that’s it! A super easy project easily done in an hour or so. I’d love to hear your thoughts on it. 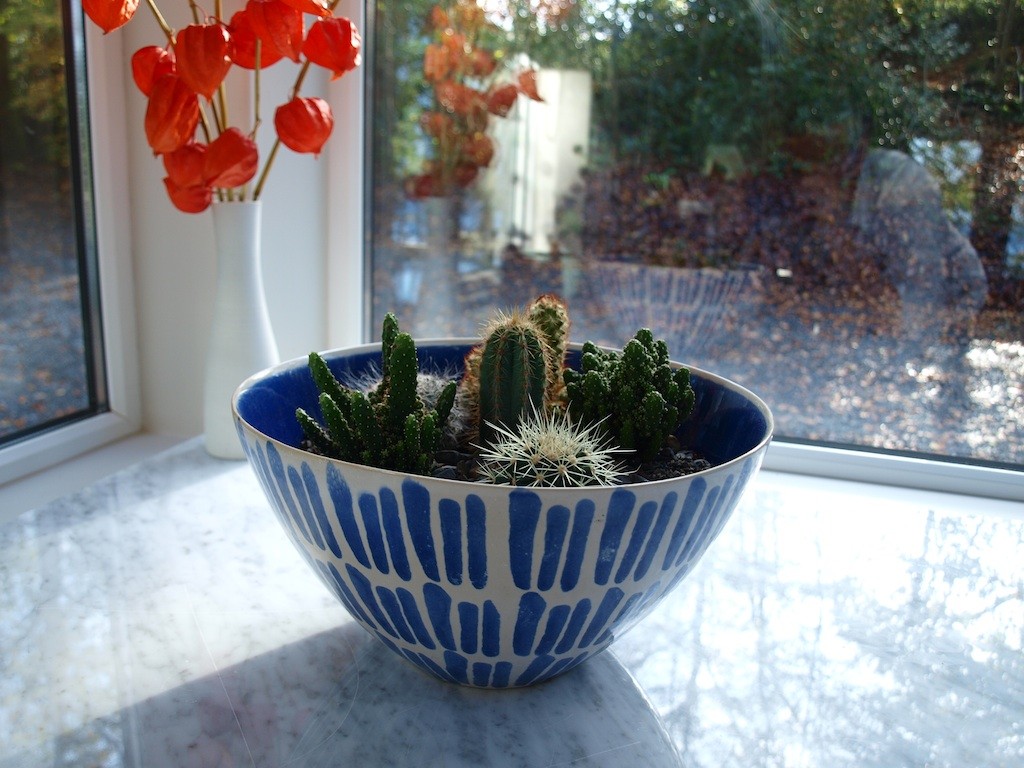