In Praise of a Red Door

I am very partial to a red door. Red is an under-used colour in interior design these days with its obsession with smoky greys and moody blues. There is something about a red door that automatically bestows cheer, that makes you want to cross the threshold and meet the people within, whether it be a country farmhouse or a grand Georgian house. I have fond memories from my childhood of those Irish farmhouses with their whitewashed walls and red doors – and often red gates too – that dotted the countryside, like bright Christmas baubles. The owners may have known, or maybe not, that red works brilliantly with the bright greens you find in the countryside. And if there’s one thing you can be sure of, there’s a lot of green in the Irish countryside. Much fewer red doors nowadays sadly, but I still smile when I come across them. 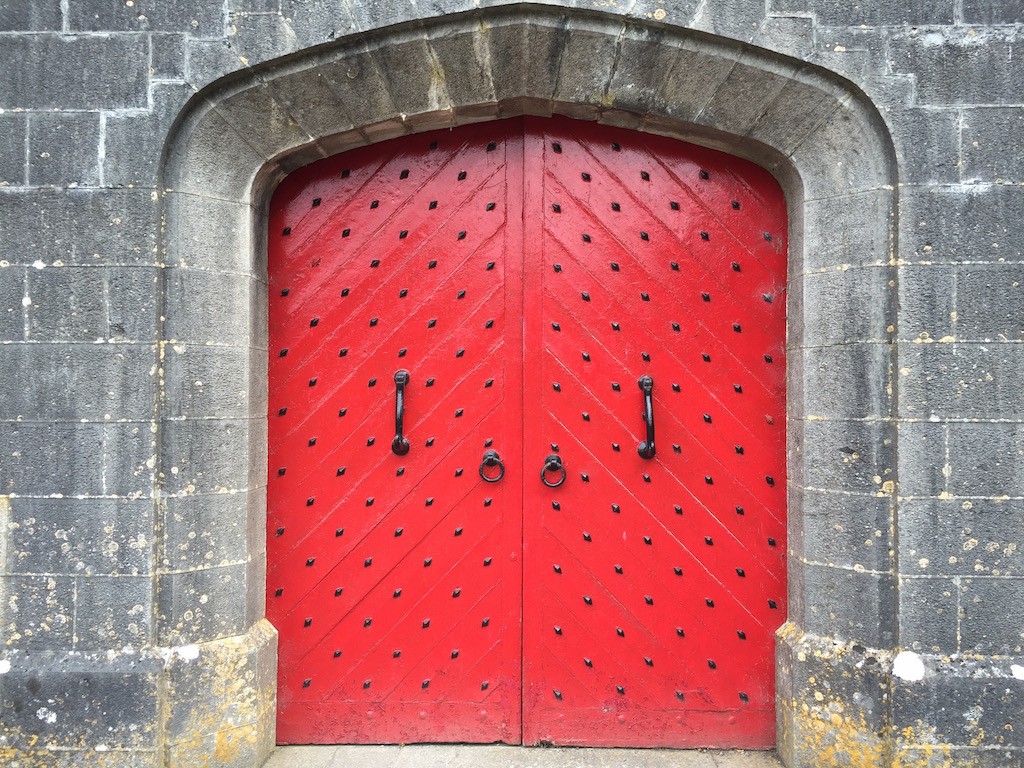 I was reminded of this recently when we visited Tullynally Castle near Castlepollard in county Westmeath. It’s a gothic style pile, the largest privately-owned house in private hands in Ireland and ancestral home to the Pakenham family. Thanks to the kindness of Mrs Pakenham we were able to tag on to a tour party led by local historian and raconteur extrordinaire Bartle D’Arcy. 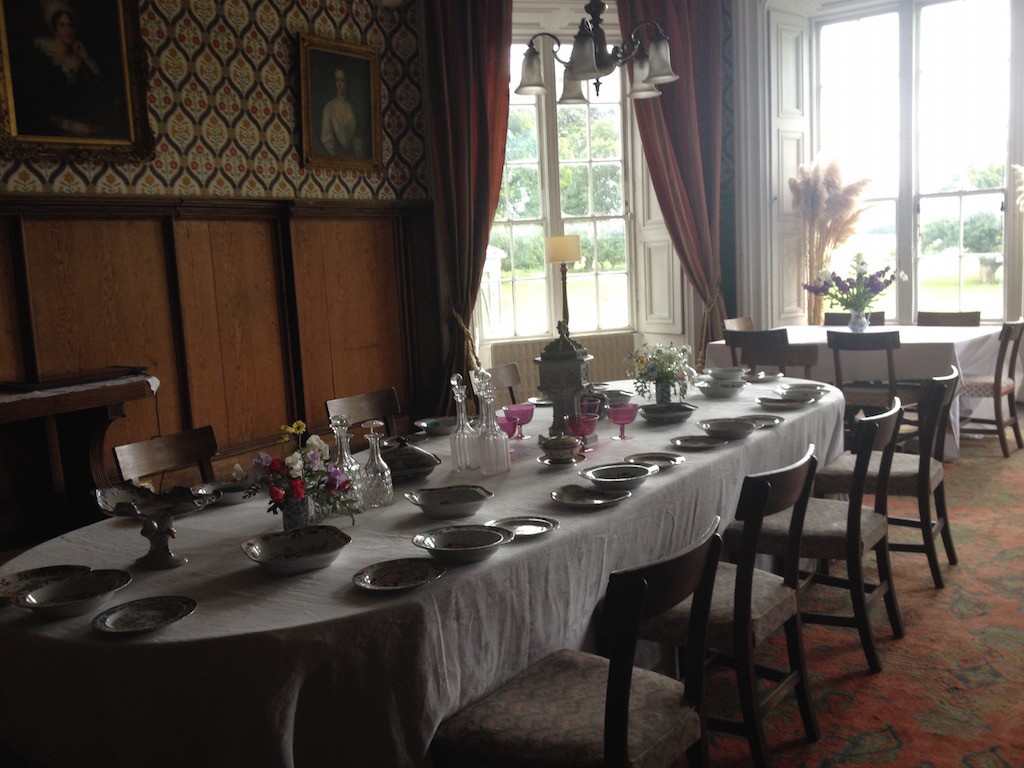 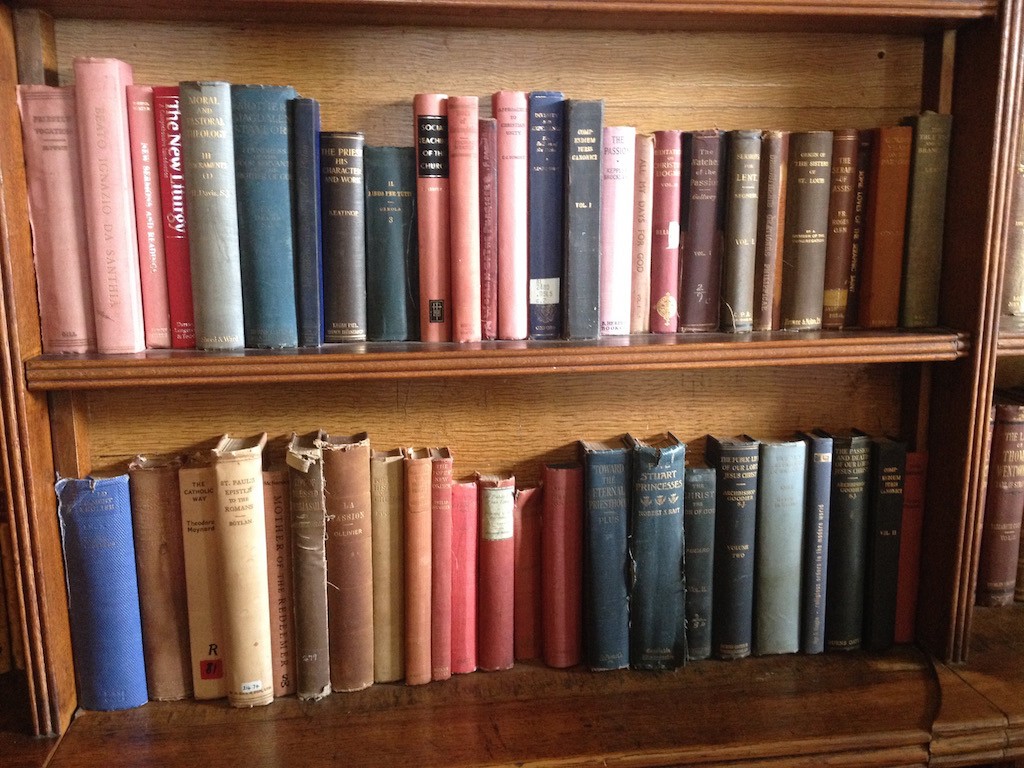 The library has a Harry Potter-ish secret door to connect with the dining room commissioned by the current Mr Pakenham. According to our host, he was a little perturbed to learn that the joiner had cut the spines off a number of volumes to mask the doorway. Looking closely though, you can see that the crafty joiner had used a job lot of Christian-themed books he acquired at an auction of a priest’s library. 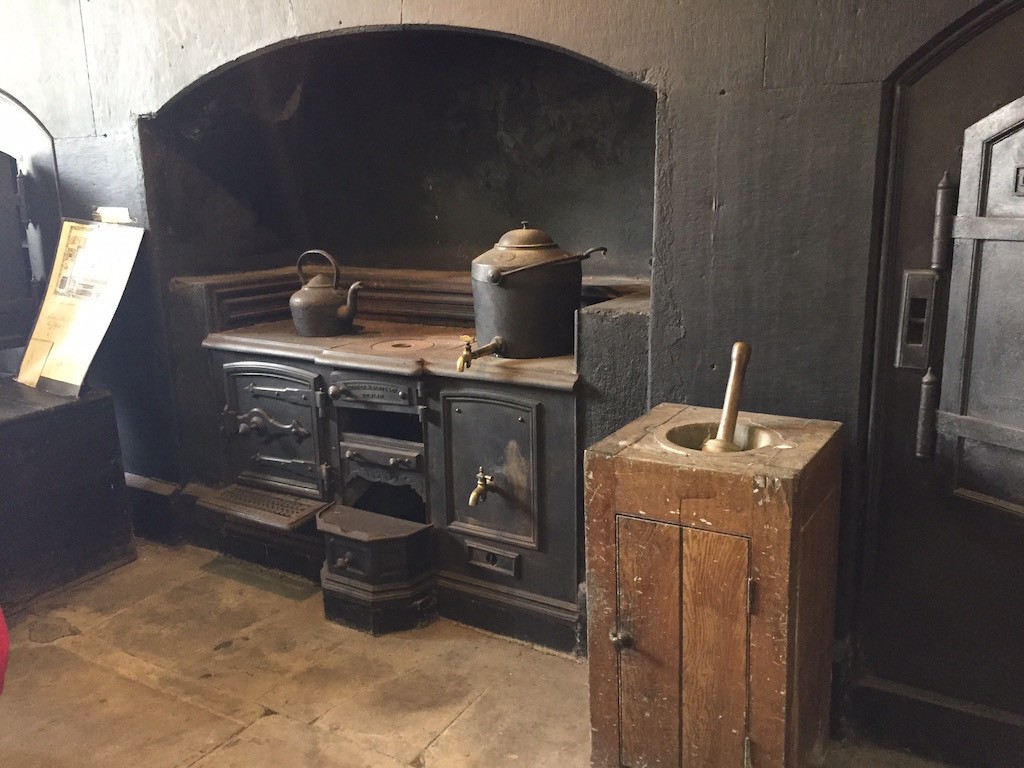 Clearly  you needed a sizeable kitchen to service a great house. 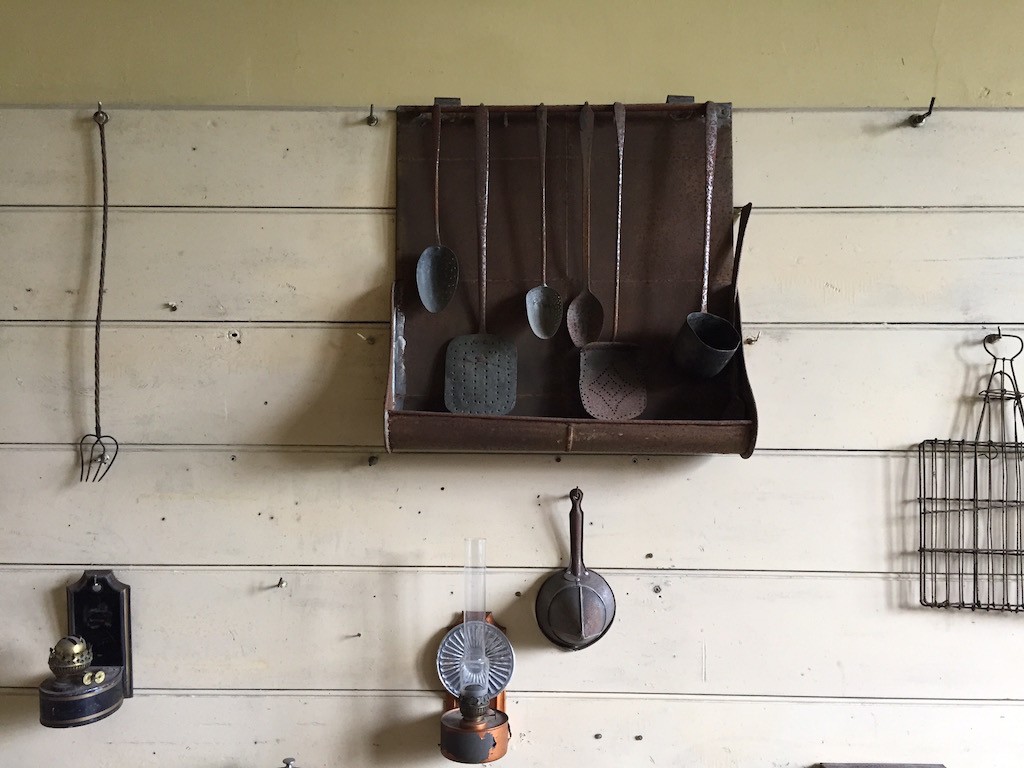 A pretty collection of tools 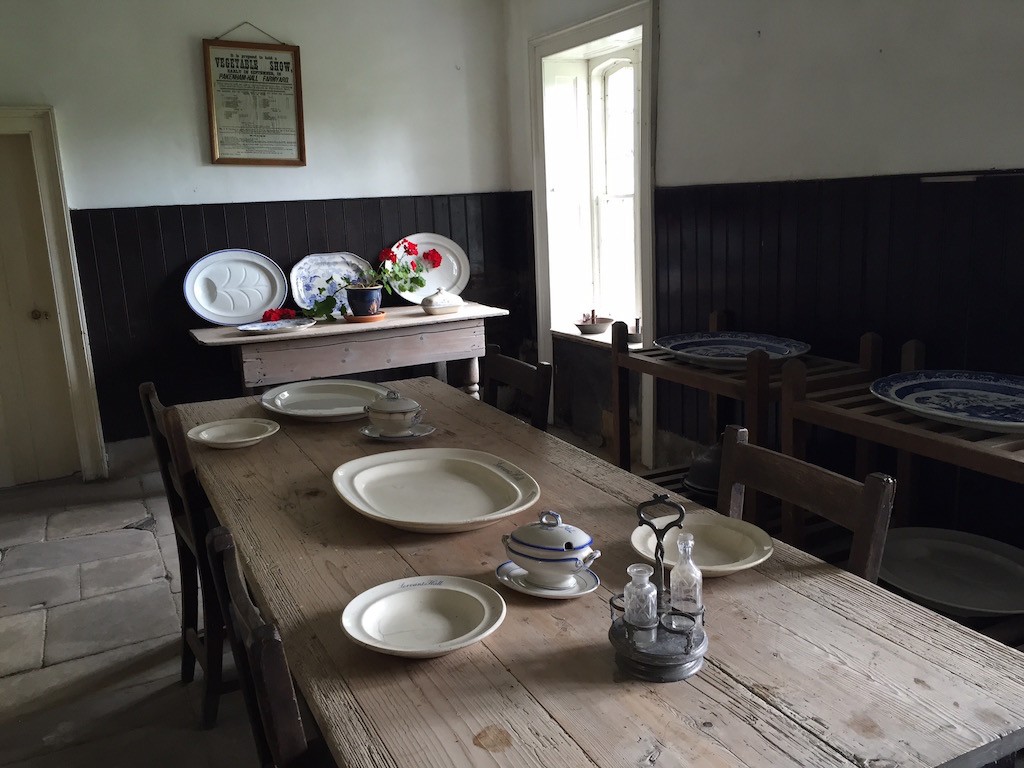 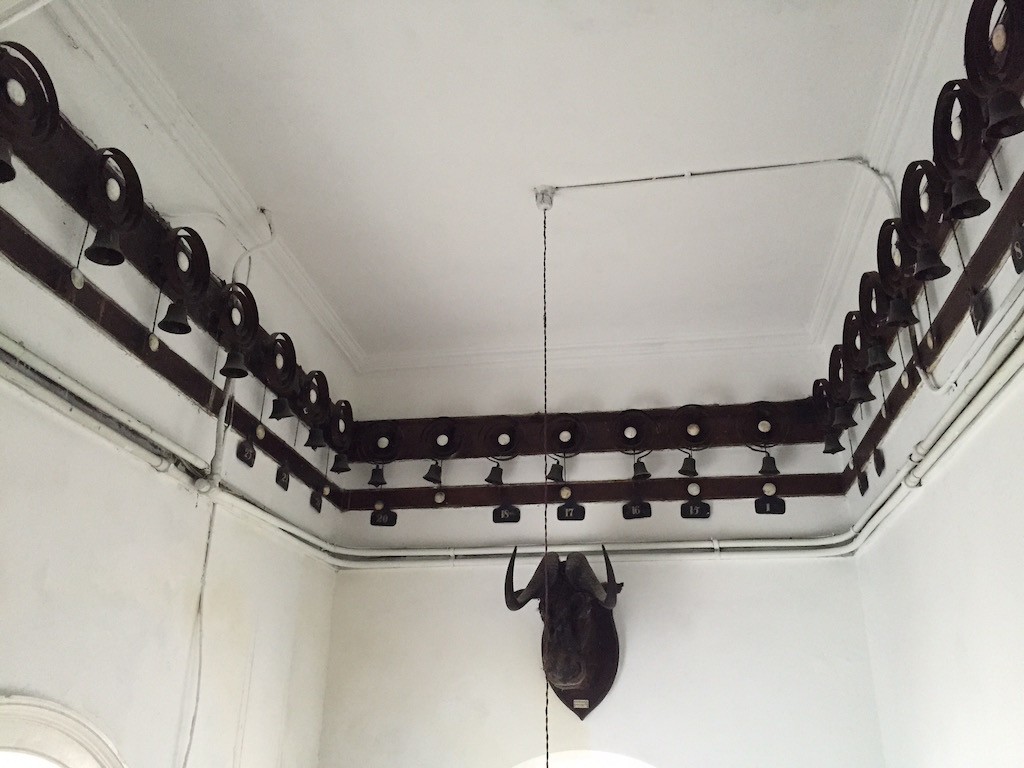 An astonishing collection of bells for the rooms 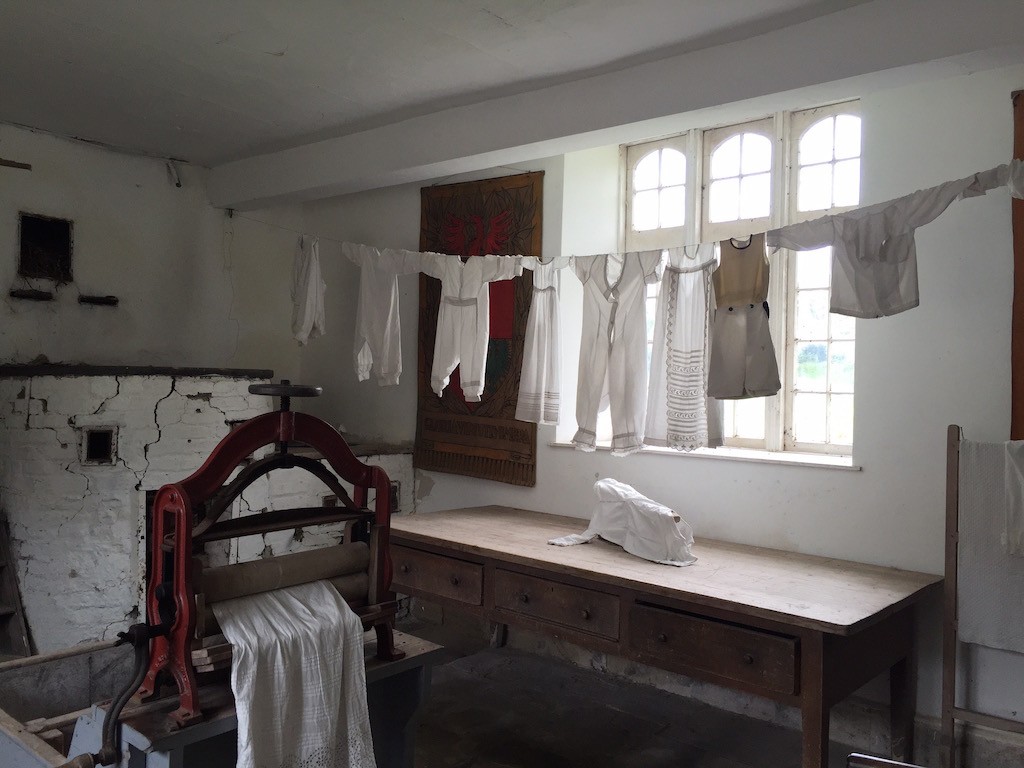 The laundry facilities are impressive to say the least. 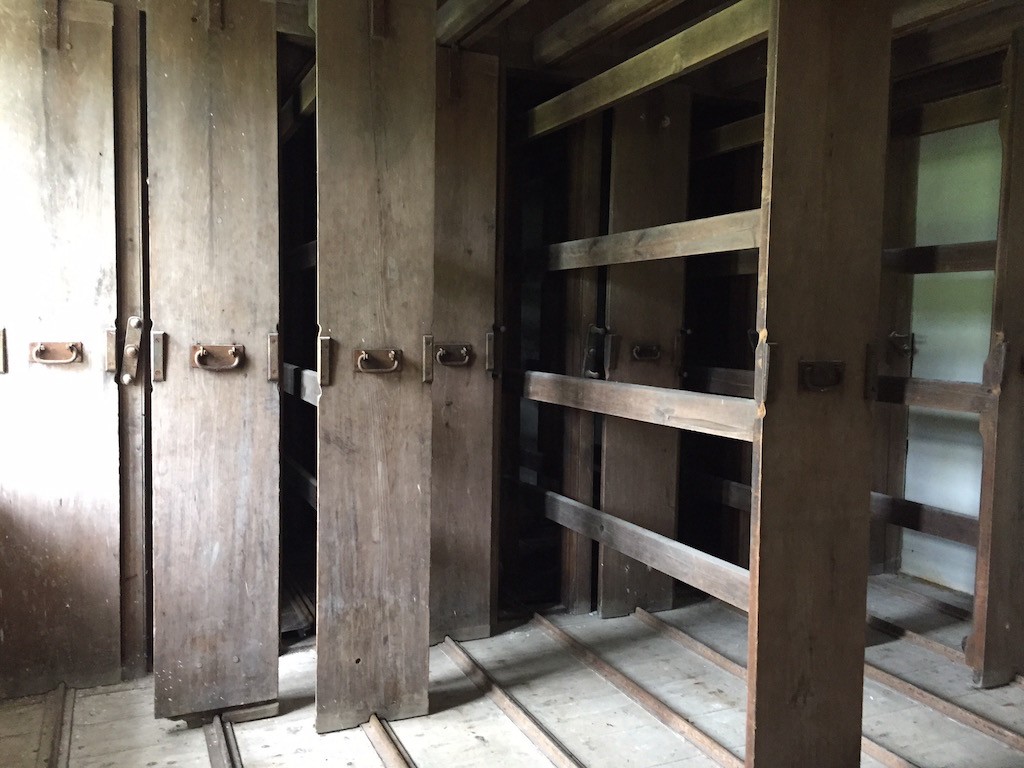 Including a comprehensive system for drying the laundry 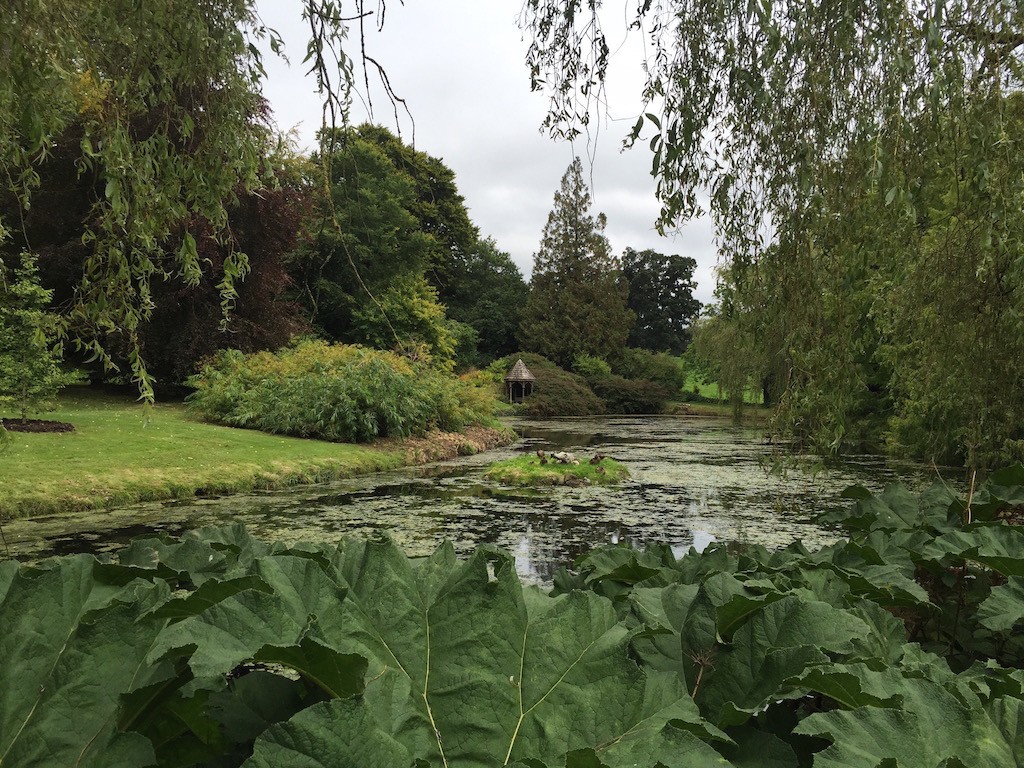 The gardens here are impressive. Terraced lawns overlook 18th Century parkland. The adjoining woodland gardens and walled gardens date largely from the same period and encompass a grotto of eroded limestone from nearby Lough Derravaragh and two ornamental lakes. Thomas Pakenham is a keen plantsman and has added Chinese gardens and a local sculptor has made woodcarvings to dot around the woods. The walled gardens have extensive flower borders and an avenue of giant 200 year old Irish yews. A woodland walk leads to the lower lake past plantings of giant lilies, camellias and rhododendrons. 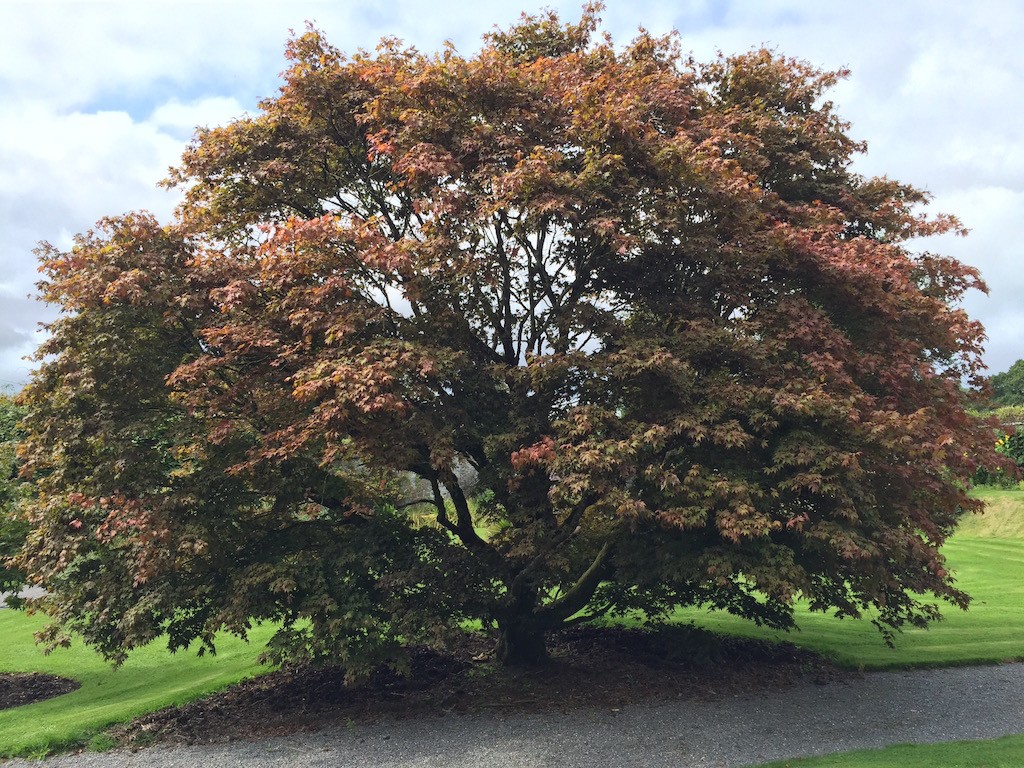 This acer was planted by one of the previous Earls of Longford. Not a natural gardener, it was apparently his sole contribution to the gardens. Difficult to miss though, as it is growing right in the middle of a path! 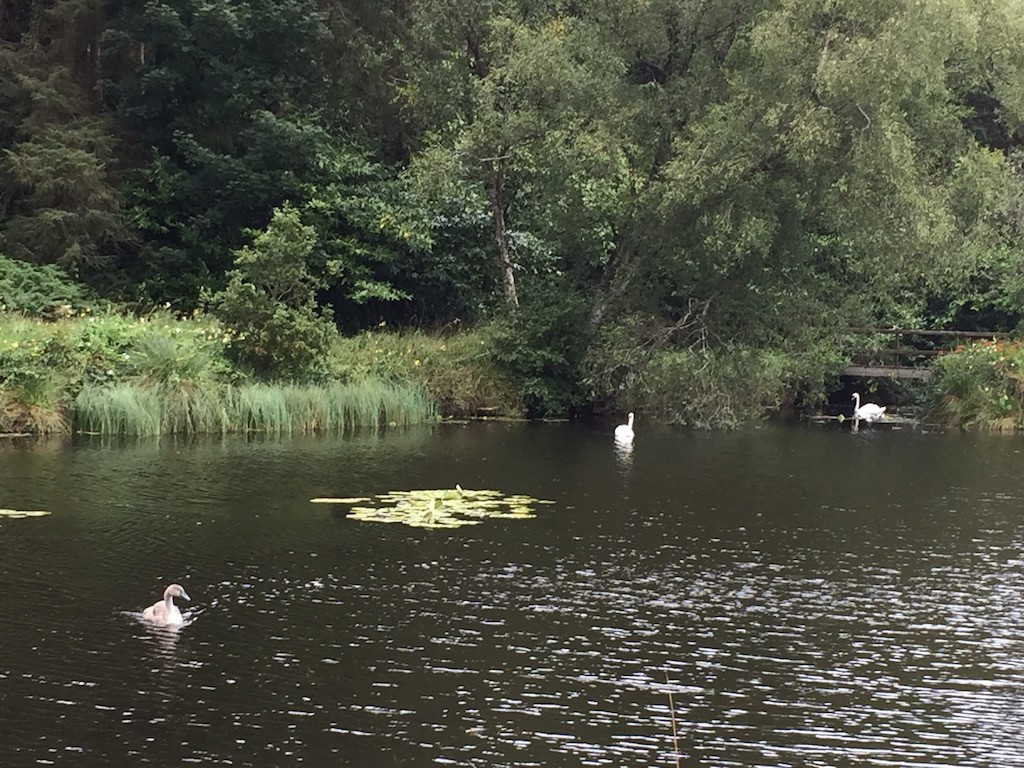 This family of swans on the ornamental lake reminded us that nearby Lough Derravaragh is where folklore has the children of King Lir spending three hundred years after being turned into swans. This cygnet was very friendly and maybe a bit bored but the parents were very protective! 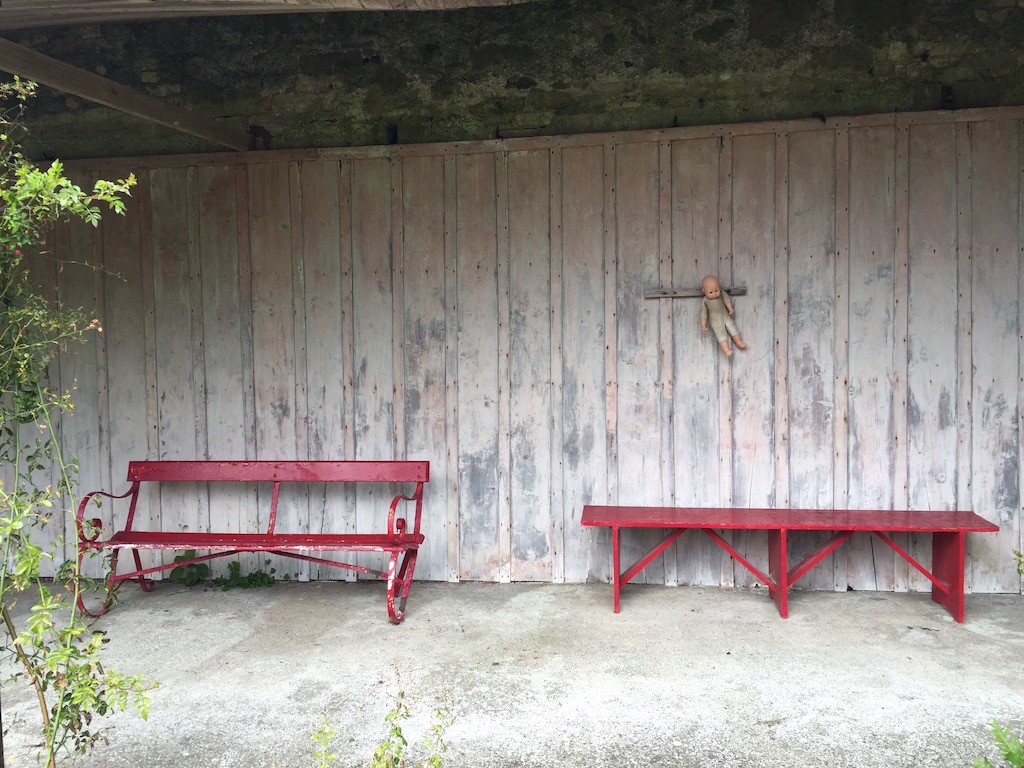 Another nice splash of red. No, I don’t know why the doll is there. 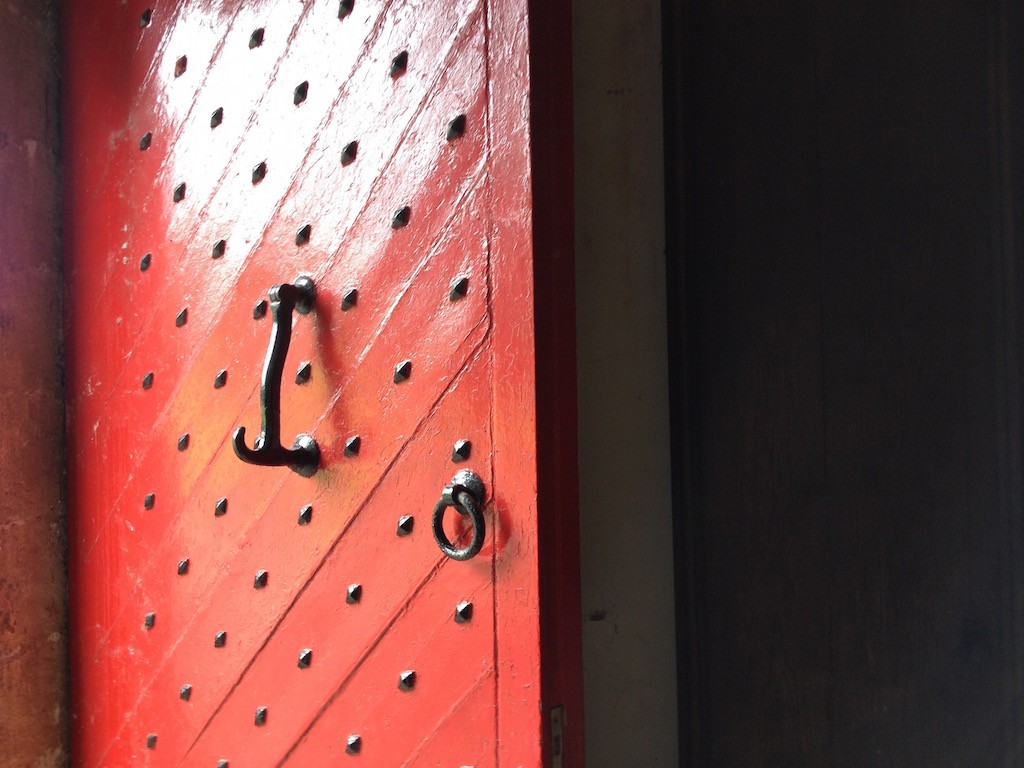 Time to close the door on this visit. One last look at that lovely door 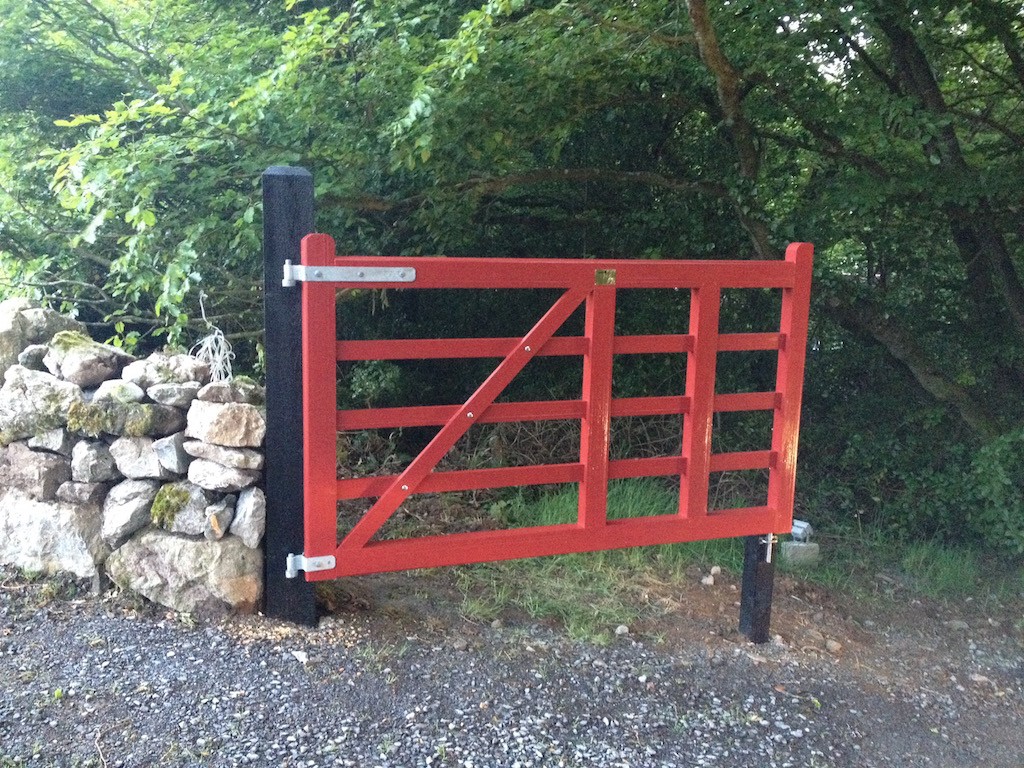 I haven’t yet got my own red door but Egon’s cottage does now have red gates!

The gardens at Tullynally Castle are open at weekends and bank holidays from April to the end of September, as well as daily during Heritage Week in late August. The castle is only open by prior arrangement.