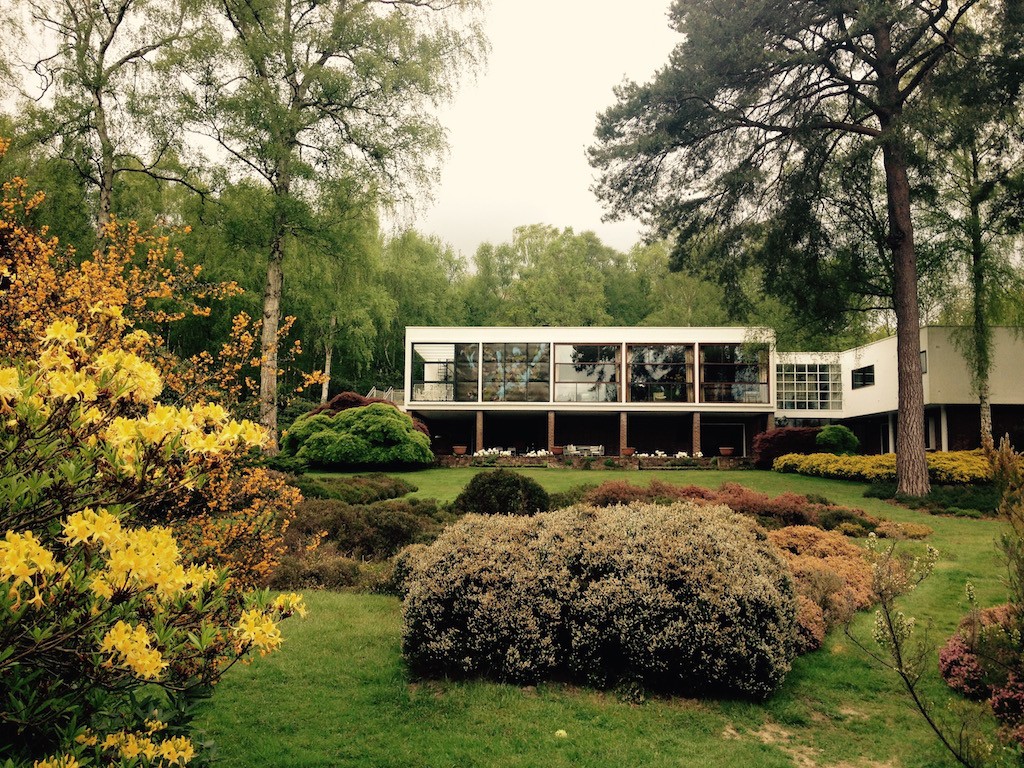 We recently explored the Homewood, near Esher in Surrey. It’s a beautiful modernist villa, the life work of Patrick Gwynne. He built the house for his family in the late 1930s and lived there all his life. He bequeathed it to the National Trust on his death in 2003 . It is one of only two modernist properties in the Trust’s portfolio – the other is 2 Willow Road, Ernő Goldfinger’s home in Hampstead.

As his friend the architect Denys Ladun observed, the Homewood was “the great love of Patrick’s life“.

The house is a surprisingly mature architectural achievement given that Patrick was in his mid twenties when he designed it. He worked in the office of cutting edge architects Wells Coates and absorbed continental influences, including Le Corbusier to create a sophisticated example of the Modern Movement. 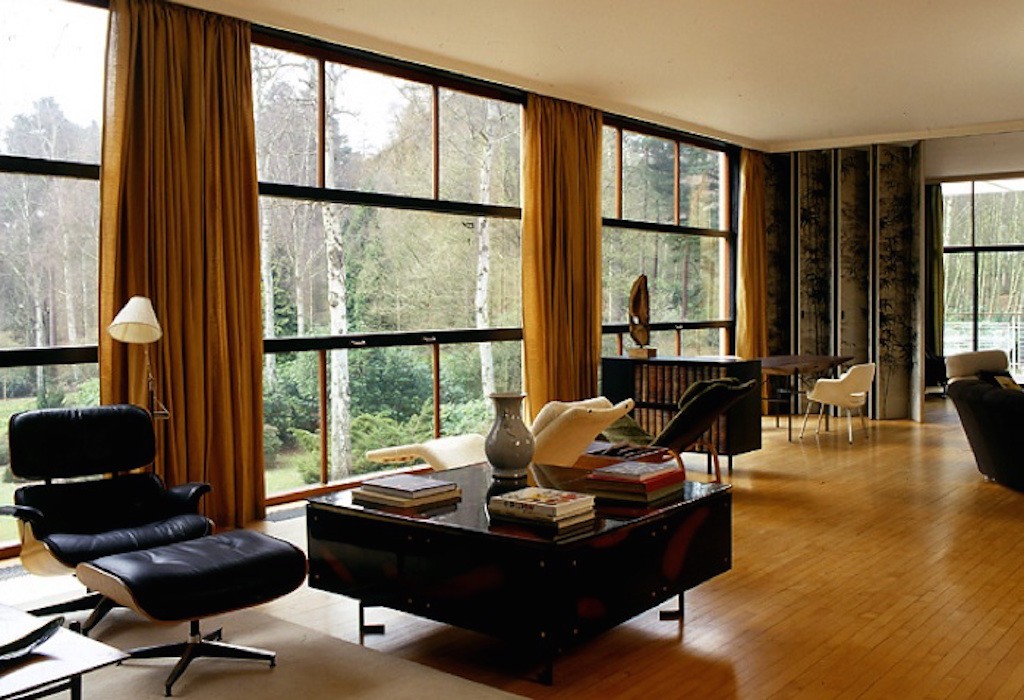 Patrick spent the next six decades refining the style and appearance of the building’s interior design, ensuring they stayed fashionably up-to-date. The living room is a tour-de-force with a raised view of the length of the garden through the south-facing wall of windows. 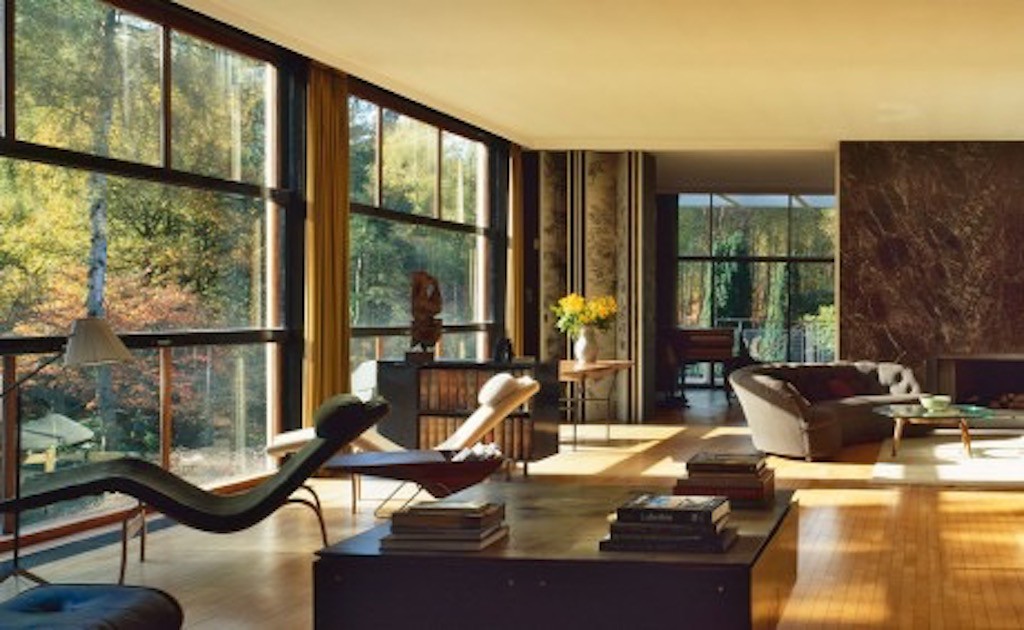 The wall opposite is a masterwork of cabinetmaking. A series of built-in wall units (originally in walnut, but replaced by Indian laurel when this faded). with a tripartite system echoing the arrangement of the windows. The outer sections have inset shelves to house books and display objects. The central section is enclosed by sliding tambour doors, behind these are spaces for the drinks cabinet, the Bank and Olufsen hi-fi system and a serving hatch through to the kitchen on the other side of the wall. A concealed built-in serving-table pivots out from the wall and unfolds its single tubular metal leg for parties and buffets. 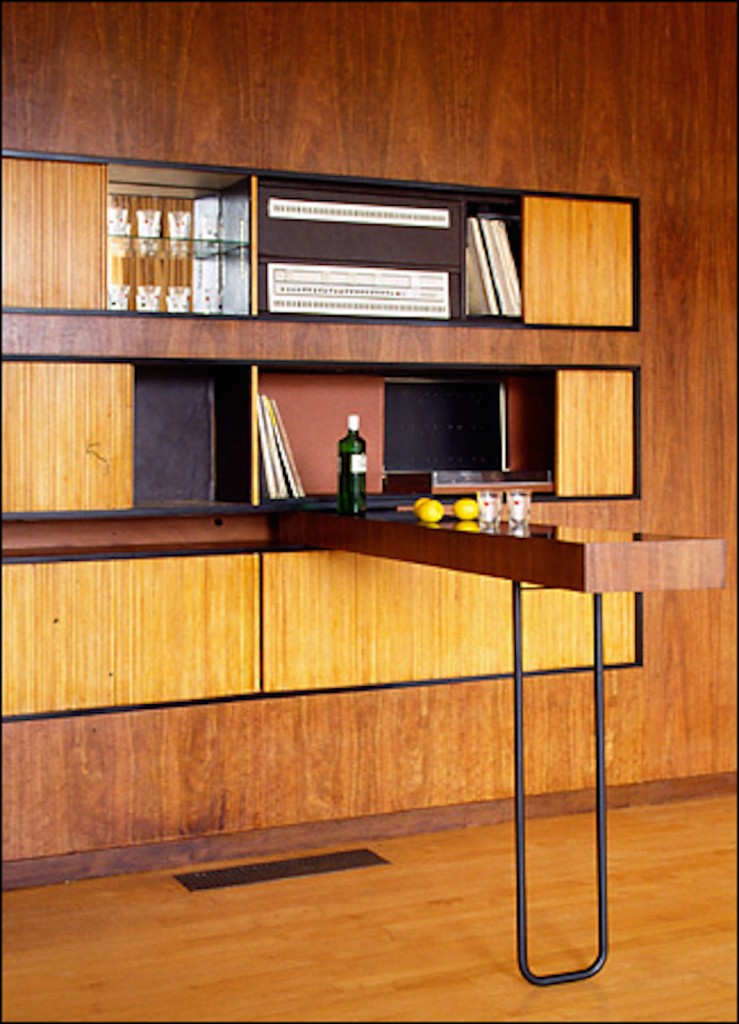 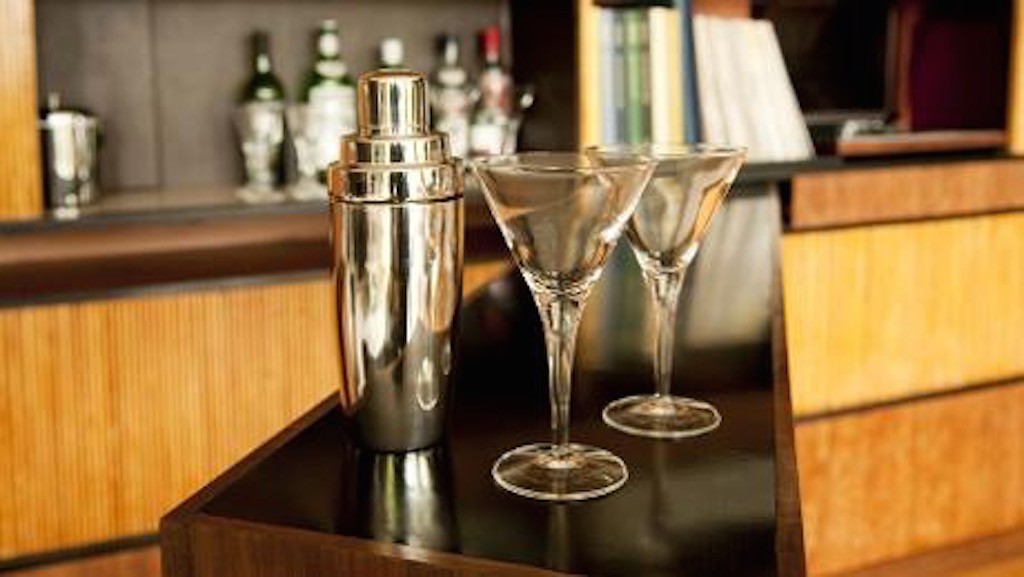 A pair of beautiful chaise-tongues by Swedish designer Bruno Mathsson, covered by Gwynne in beaver lamb “fur”, are placed invitingly to make the most of the magnificent view through the windows. These have been there since the Homewood was completed but much of the other furniture was placed in later years. The earlier furniture was more lightweight so it could be pulled to the sides for dancing – the maple floor is sprung.

The Eames lounger and ottoman had belonged to one of Gwynne’s client’s, Laurence Harvey, and was a present from his widow when the actor died. He designed the dual purpose desk: a writing table which becomes a drawing-table when the top is removed, with a pull-out drawer for a typewriter on one side and another for stationery and drawing instruments. Everything has its place in the desk – and in the house as a whole. The Bauhaus chair behind the desk is by Marcel Breuer, one of the first to be imported to Britain. Of course it was customised by Gwynne, who disliked the chrome finish and had it stove-enamelled in ivory. 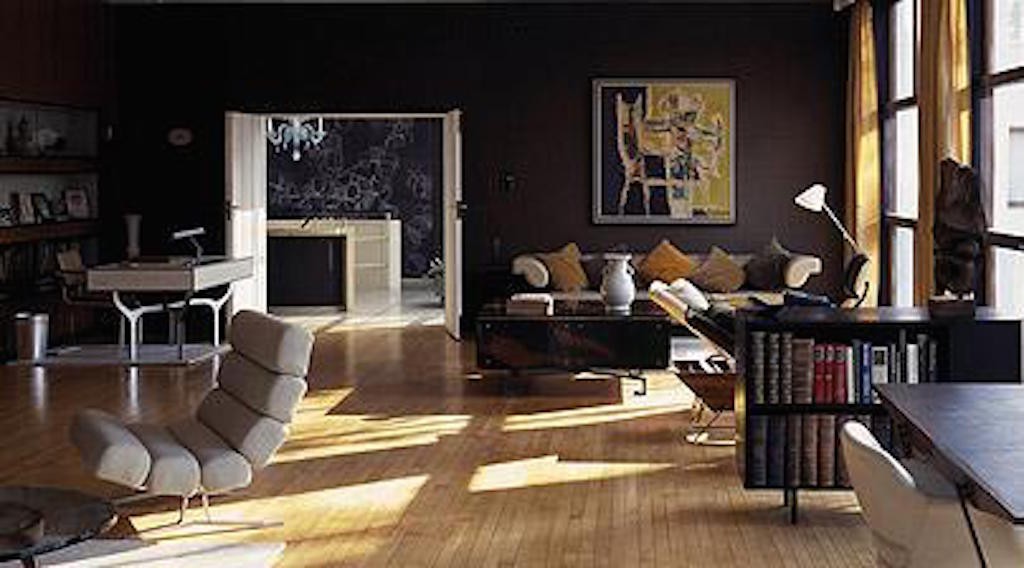 The dining room successfully blends the old and new with ancestral portraits looking down on a round dining table designed by Gwynne in the 1960s with in-built lighting and a central perspex bowl for flowers. 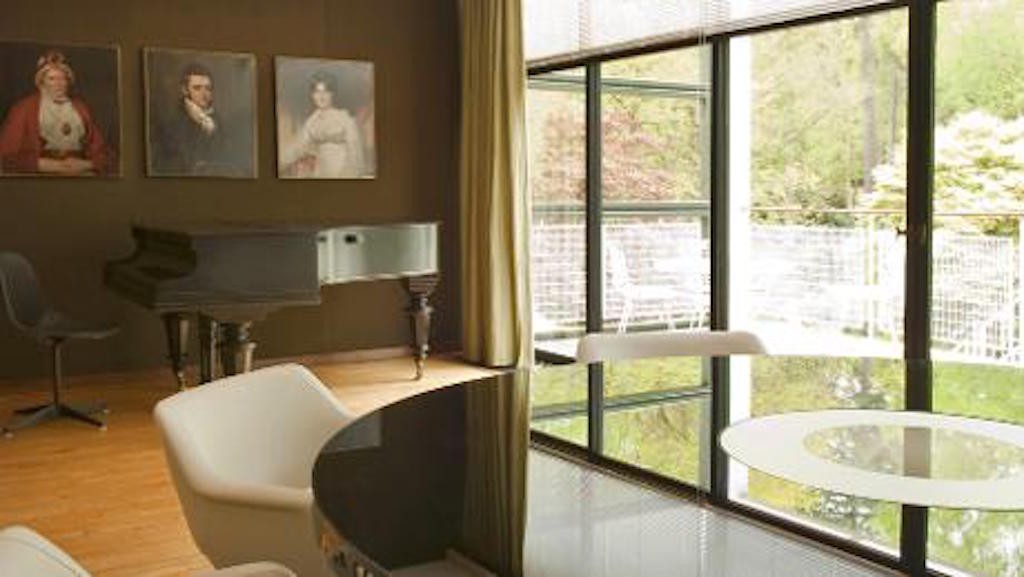 The striking spiral staircase is made from concrete with a terrazzo finish. A large sunken uplighter illuminates the staircase from the bottom. The top landing is a spacious open-plan area, filling the central block of the house on the first floor. It is top-lit by a dramatic if somewhat incongruous antique Bristol blue and white glass chandelier, purchased by Patrick’s father, Commander Gwynne. 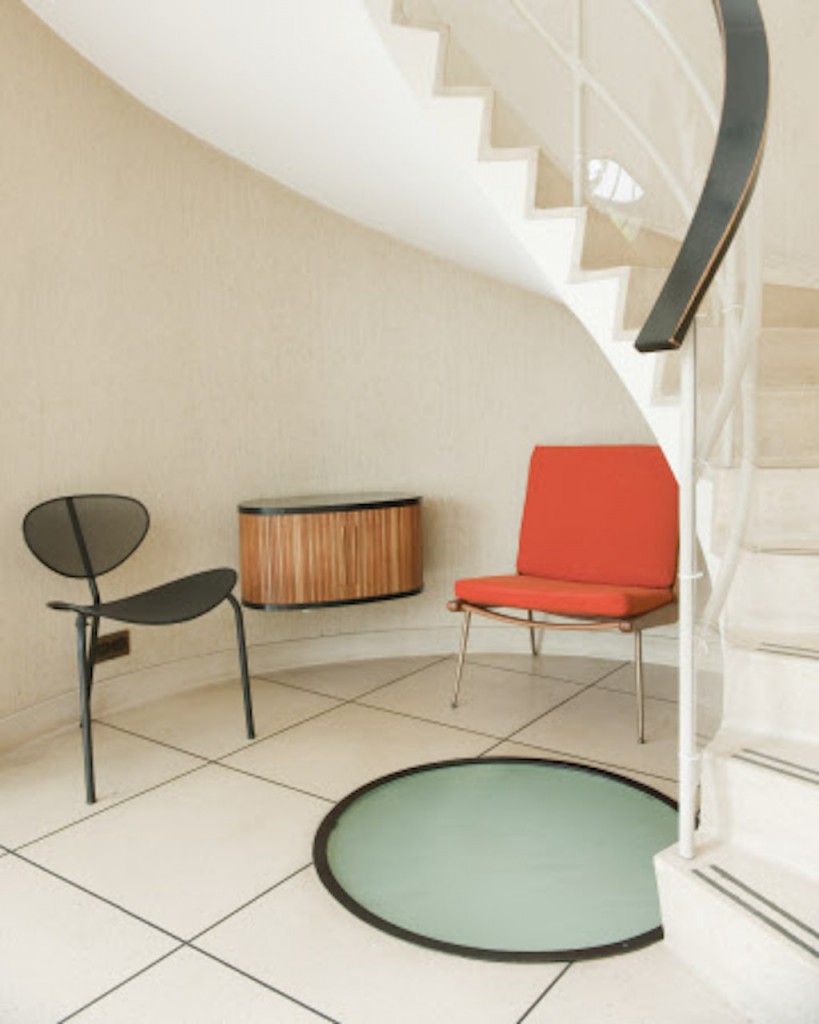 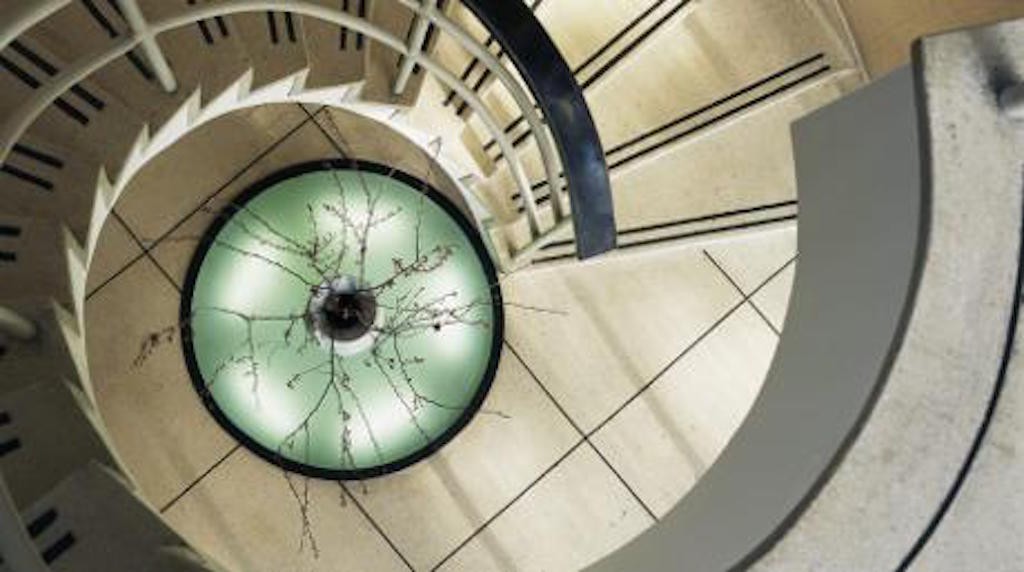 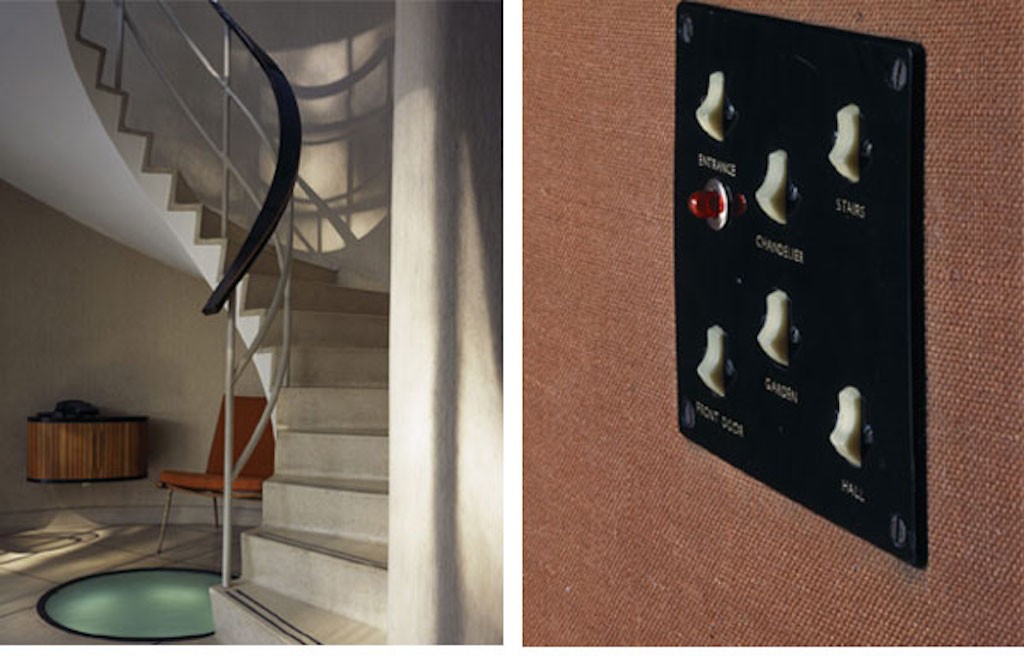 The attention to detail everywhere you look is astounding – and much designed to Gwynne’s demanding specification.

The Homewood was completely refurbished by Avanti Architects prior to being opened by the National Trust in 2004. Our guide told us a lovely anecdote about the architects and builders regularly arriving on site in the morning to Post-It notes left by Gwynne, who moved into the service quarters for the work, when he felt some aspect needed to be improved! 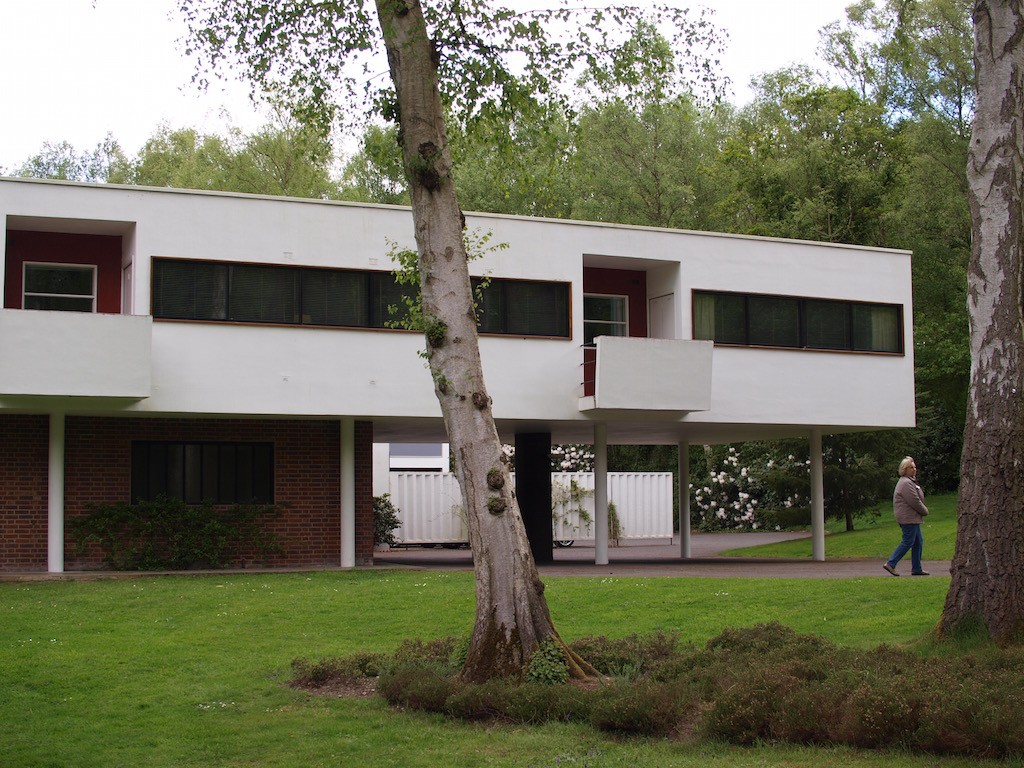 The woodland garden is worthy of a visit in its own right. It looked particularly vibrant in mid-spring with masses of bluebells and rhododendrons and I’m sure would also be spectacular with the autumn colour provided by the Japanese maples. 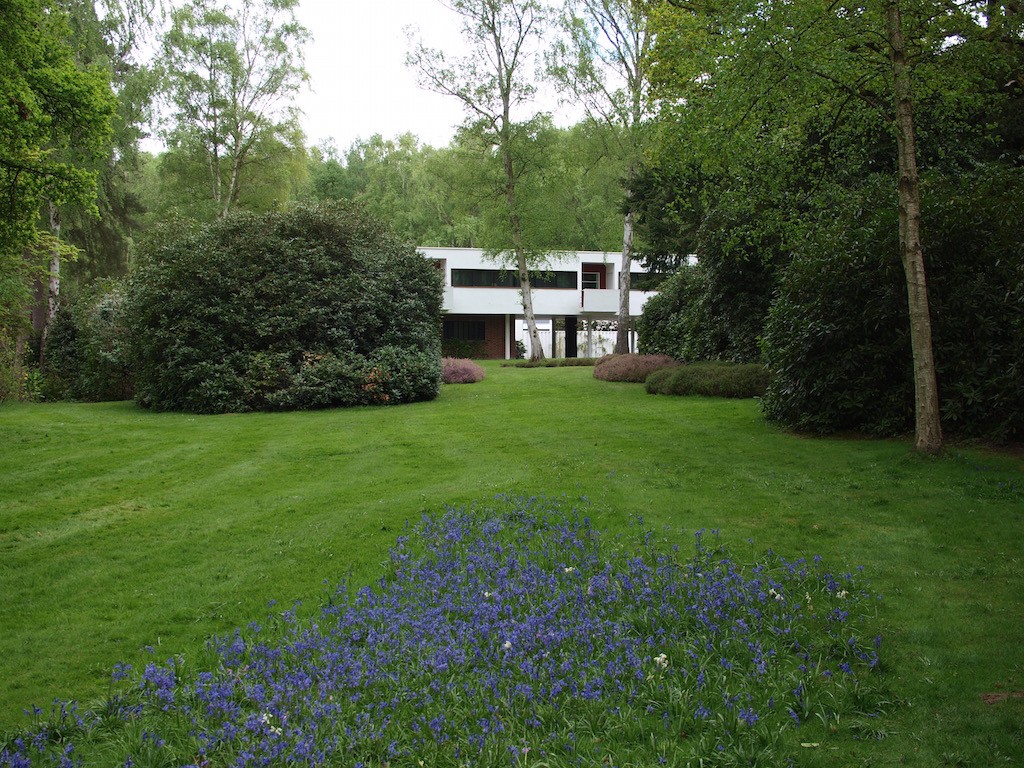 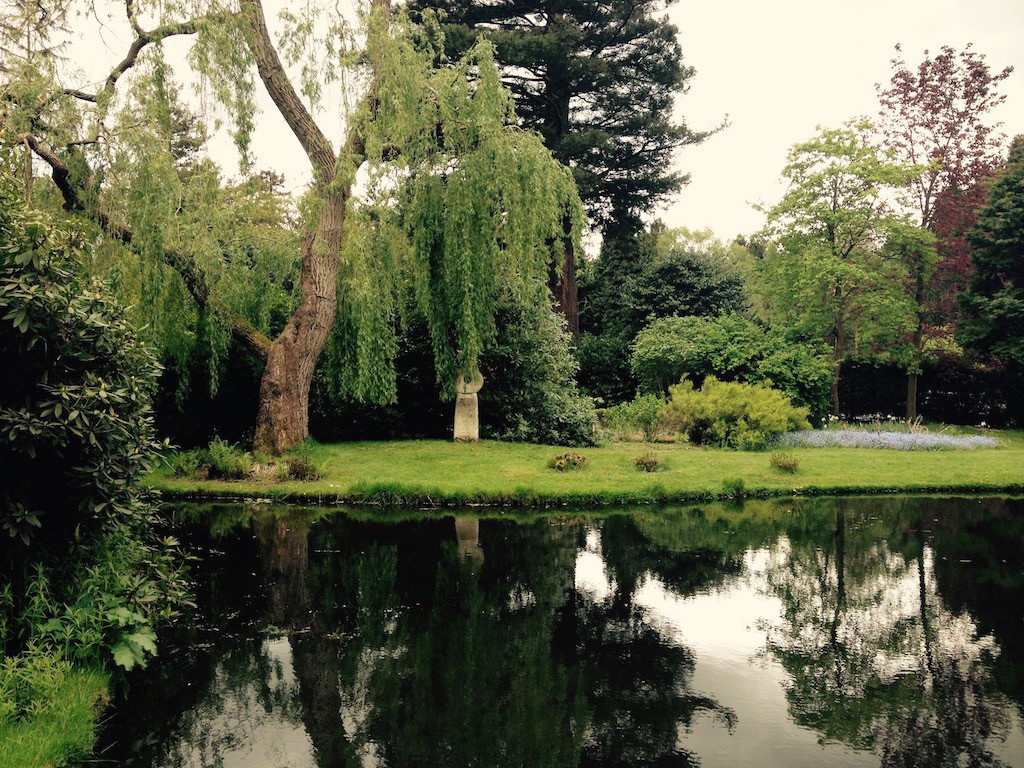 We went with our lovely friends Liz and Marie – yes, Liz and Marie “off telly” – so we had to have a selfie as we planned cocktail parties in our new home. 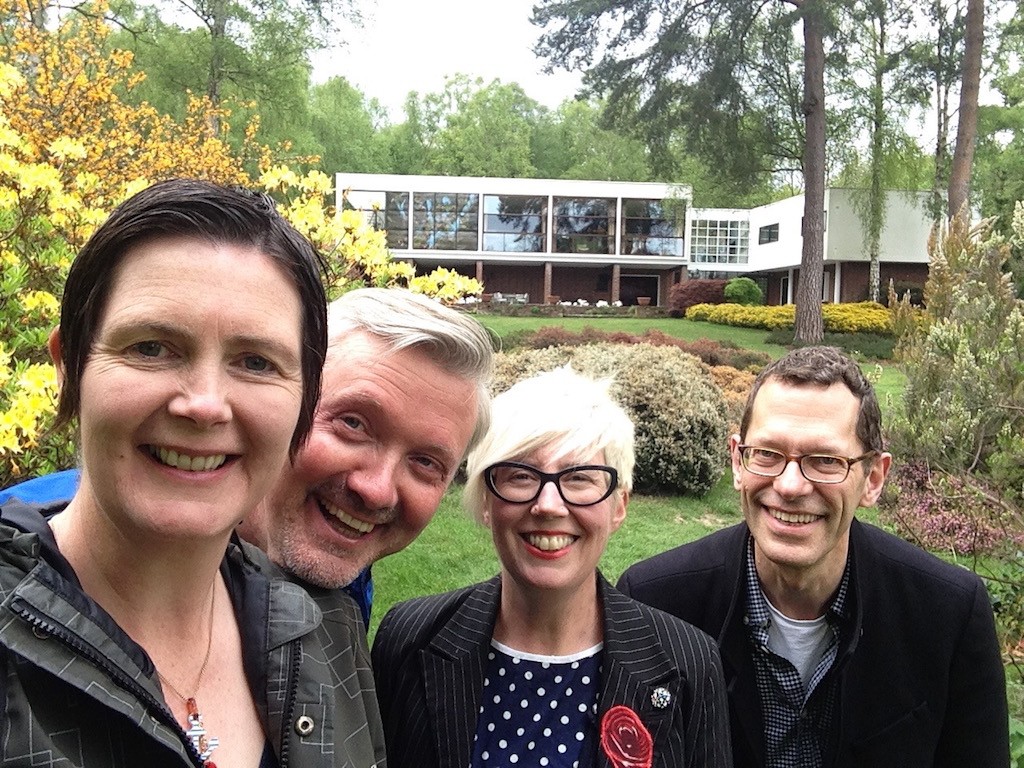 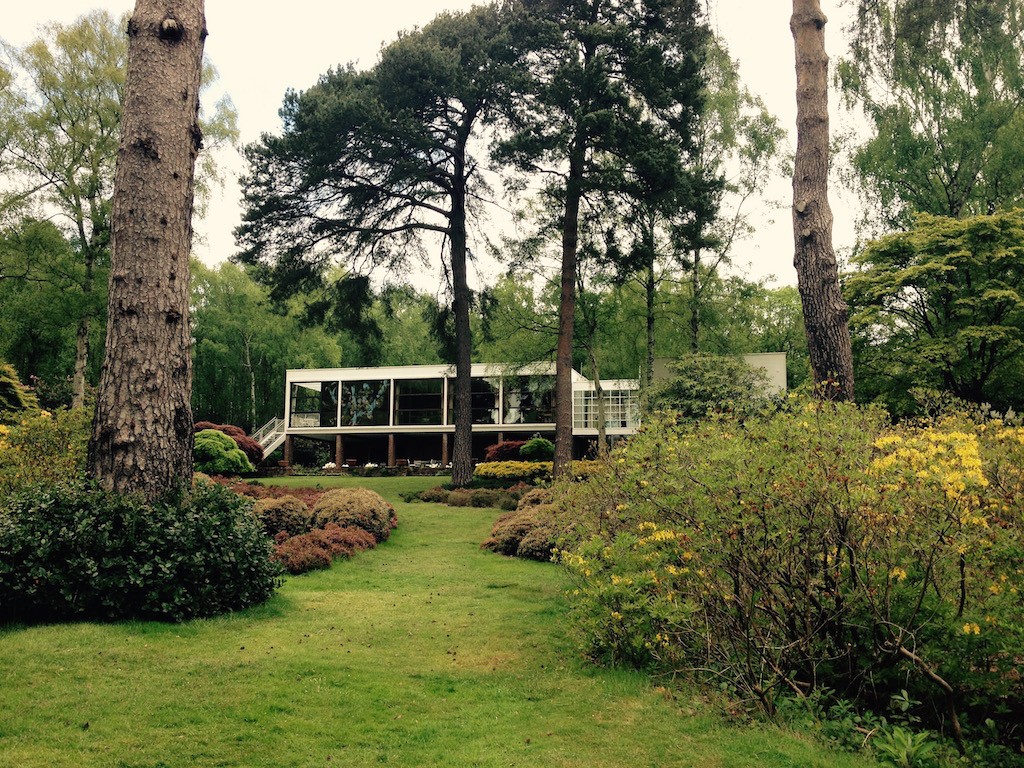 As The Homewood is administered by a tenant, visits are only possible as part of a pre-booked guided tour. Tours run on alternate Fridays and Saturdays between April and October, departing via minibus from nearby Claremont Landscape Garden. Space is limited and tours are popular, so you need to book your space in advance by phoning 01372 476424 or email thehomewood(Replace this parenthesis with the @ sign)nationaltrust.org.uk

A visit is highly recommended for all fans of modernist architecture and sophisticated mid-century interiors.

Photography inside the building isn’t allowed which is why I have used publicly available images for the interiors. 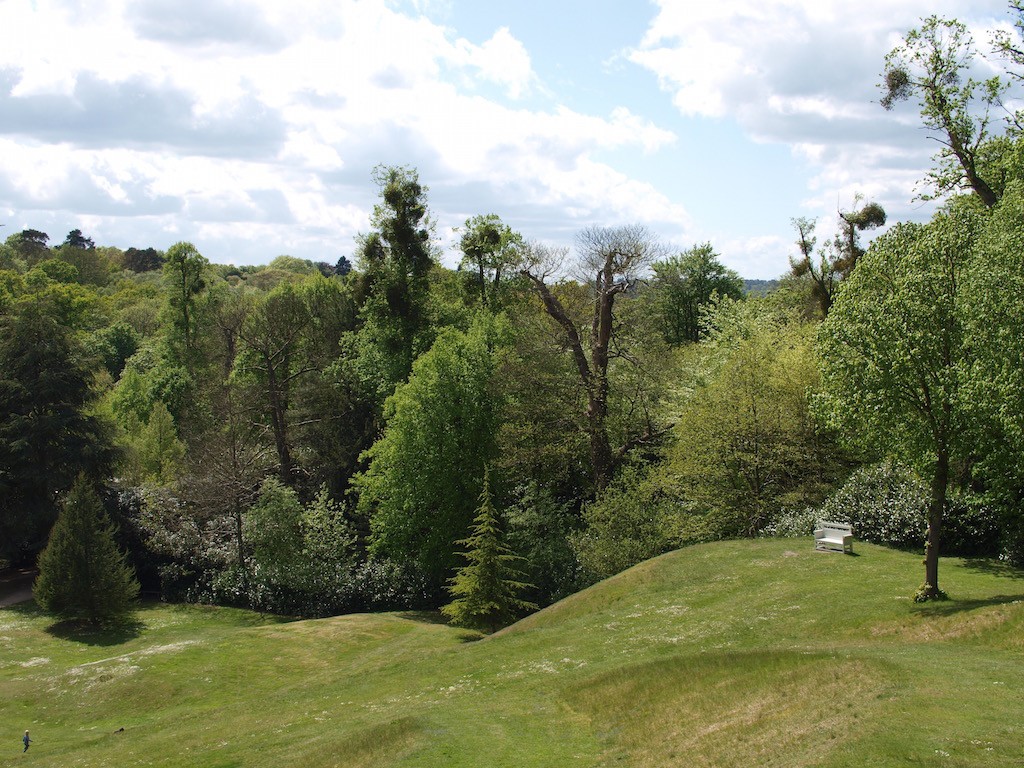 Claremont Landscape Garden is also rather beautiful – and provided another lovely backdrop for a selfie! 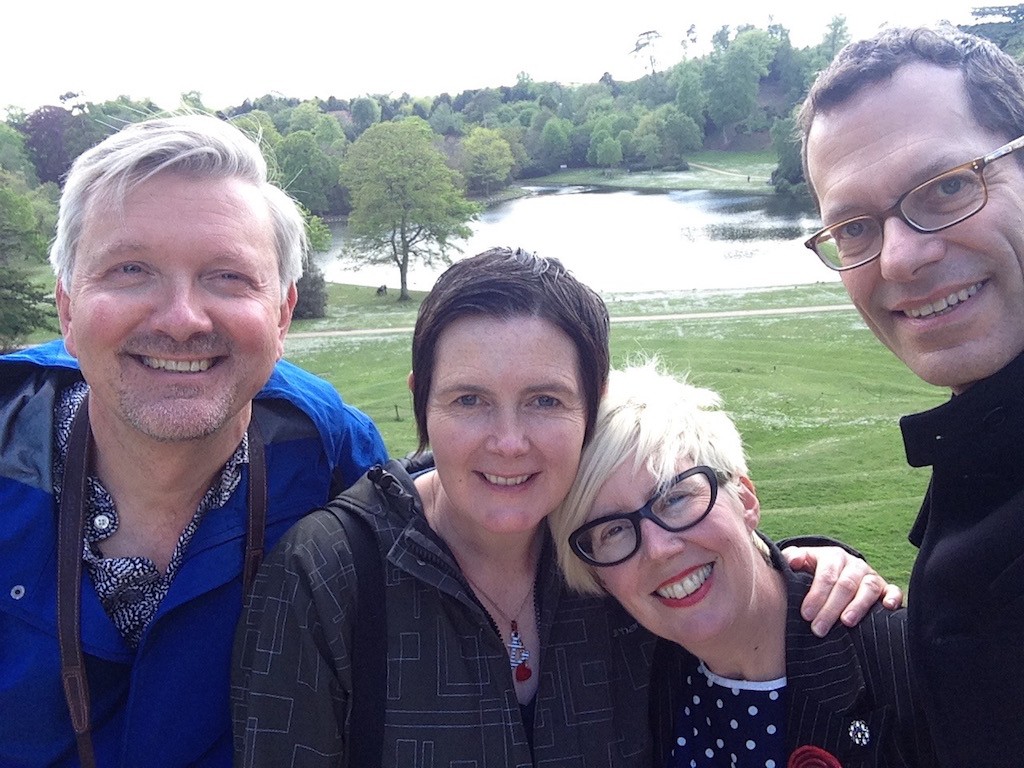